How the Italian Renaissance Began

We are still getting ready and still saving for our 5 week Italian excursion by air, land and sea this coming June and July. At first it seemed like the date would never roll around but now it's just a couple of months away! We're learning our Italian food phrases and checking the pronunciation for which I am glad because the food is what Italians are really known. As an example I learned that if I was to order a pepperoni pizza over there I would have received a cheese pizza with fresh peppers on it. I would want to have ordered a salame piccante pizza. That's good to know if you have your heart set on a certain thing.
Meanwhile we are gearing up for our first time doing a Renaissance Fair (Carnevale Fantastico) in Vallejo this May 2nd and 3rd before we leave for Italy I have been rewriting the menu boards in Old World Italian.
I also have learned a bit more about pizza during the Renaissance. First, they didn't have pizza during the Renaissance. I already knew that but I was able to talk myself into the event by talking up the aspect of pizza being Italian. Since the coordinators are putting an Italian theme to the event I worked that angle. Quickly they replied and told me they had contacted 3 or 4 other pizza vendors and never heard back from any of them! I think it was Woody Allen quoting Groucho Marx who said, "80% of life is just showing up!" They were soooo right! We got the gig!
We went to a workshop they were hosting and from the looks of it we will be time traveling back to Italy where the Renaissance began. We will be tweaking our English Renaissance outfits to appear more Italian although a peasant in England didn't differ much from an Italian peasant. We will be required to speak with an accentuated Italian accent and even disguise our booth and trailer to blend in with the period. Florins were the coin they accepted in the Tuscany region back then. Although Italy wasn't united until about 1835 I believe, we will be baking pizzas under the Tuscan Sun for 2 days accepting the standard fare of Master Card, Signora Visa and of course, Florins, gold and dollars.
There's nothing like a themed event to get my mind going. A couple of Christmases ago we did the Dicken's Fair in Elk Grove and tweaked it to become more of a Steampunk theme and ended up winning the prize for best booth decorations. We've also done a couple more actual Steampunk events and now we're time traveling once again. I've contacted other themed events but the Civil War re-enactors didn't want us nor did the Celtic Fair but I think it's their loss for not benefitting from my creativity.
I'm also painting the dome of my oven to look more Italian old world. aged and distressed. It's not just for this event but because it needed to be painted so I'm employing my painting skills to age and distress it to give it more of an authentic look. One guide in Italy a number of years ago said that the Italians weren't big into maintenance as one might witness when you're there but it's what gives the cities so much character.
Our tent canopy will be covered in burlap to rid us of the white nylon appearance and the trailer skirted in burlap as well to hide the chrome and tires. I was thinking of painting Leonardo DaVinci's Vitruvian Man across the front skirt of the booth with his arms out saying, he would like a pizza this big! 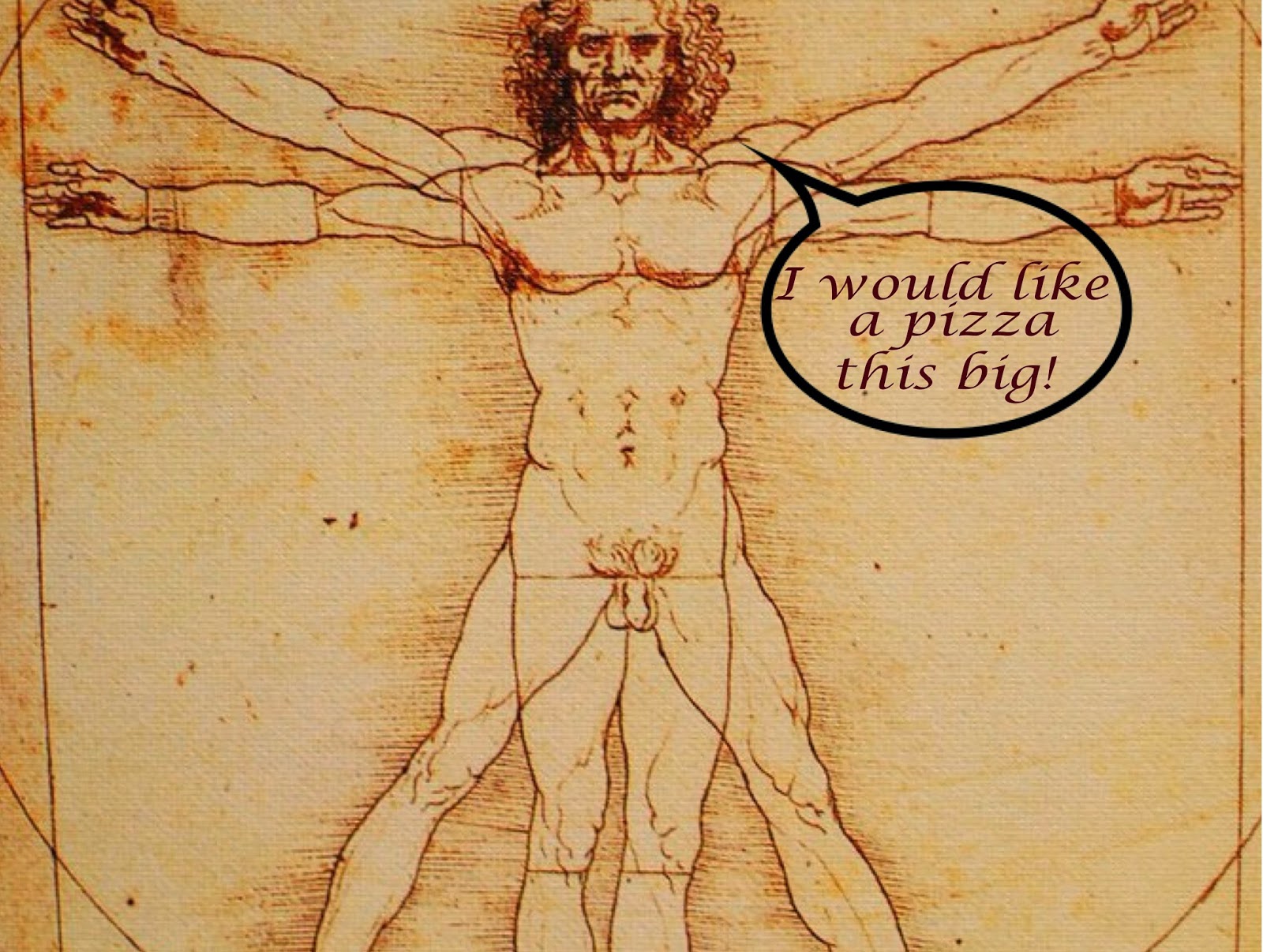 What's not to like about time traveling with pizza? You get to experience it in another century, another country and another culture.                               I think that if renaissance really had started in Italy then the reason had to be that someone was up late one night trying to put together a midnight snack in the wood-fired bread oven and probably stumbled on a way to tweak that ball of bread dough just a bit by flattening it out, giving it a few twirls and then drizzling some marinara over it. Then he added some leftover mozzarella,  tossed on a few slices of salame piccante and slid it into the oven for a couple of minutes. Moments later, the midnight snack was invented and the  Renaissance was born. The rest is history!
at 1:00 AM No comments: