A more than fair Pear Fair

Intense is the only word I could think of to describe our debut as pizza makers. The quaint little town on the Sacramento river named Courtland could almost be the backdrop for Andy, Barney, Floyd's barber shop and Goober's filling station. Courtland will be a new word in my vocabulary as well as Pear Fair for years to come. We thought that to make our debut in a small rustic little town we could make a soft entrance into the world of food vending and if we screwed up that nobody would really notice. We would comfortably handle the small trickle of folks by talking to them from our little 10' x 10' booth and convince them to try a wood fired pizza from our recently purchased pizza trailer/oven. We figured it was Courtland. Nobody intentionally goes to Courtland. They just whiz on past it without ever giving it a thought. There was no signal, no intersection, not even a Goober look alike filling station. A great place to get our toes wet. Yes, I have been wrong before but never so much as thinking Courtland would be an easy training ground for our fledgling pizza business debut.
We arrived early, set up quickly, then had to move the pizza trailer about 3 times to make everyone around us happy then we had to move our booth back 5 feet to accomodate the trailer position which killed about 30 minutes of our precious time to get ready. It was just Greg and myself at 6:30 in the morning with 2 and a half hours until opening and it seemed doable. Then our wives and niece showed up on time and before we knew it they were telling us the fair opens in 7 minutes. Wow, where did the time go? Not a problem, I thought. Nobody but me eats pizza at 9 o'clock in the morning. We'd have plenty of time to go use the bathroom, have a snack, check out the other vendors, browse the classics at the car show and still make adjustments to the booth, throw another log on the fire and twiddle our thumbs for another hour until some hungry fair goers decided they were hungry enough to buy a pizza.
At about 9:02 we took our first order. A pear pizza with proscuitto, mozzarella, gorgonzola and walnuts was the first call. Huh, somebody really wants a pear pizza? They aren't my favorite pizza but we were asked to accomodate the crowd by putting a pear pizza on the menu. Of course we will just to make them happy. Was I wrong again. After the end of the day about 70% of our pizzas sold were pear and proscuitto. I'm thinking now, "I need to rethink my thinking!" From that first pizza order until about 3:30 in the afternoon we sold pizzas like they were the last pizzas on earth. Not one of us ever got a break, a lunch or a moment to rest. We took orders, assembled, baked, cut and turned out pizzas in a storm of hungry pizza eaters. There was never a pause for small talk, chit chat or even a glance over our shoulders. We worked furiously in the heat and the heat of the oven for 6 and a half hours until we were able to look up and see what a mess we had made. Nobody kept a count of how many, there wasn't time. I believe our break lasted 12 minutes before the early dinner crowd started lining up.

I thought to myself about that Kenny Rogers song called The Gambler where he sings, "You never count your money when your sittin' at the table, there'll be time enough for counting, when the dealin's done." I turned to Greg and told him the last thing I remember was the health inspector was here and going down the checklist. That was over 5 hours ago!
The fair closed at 6:00. I couldn't have been happier to see those pear people go home. Criminy, doesn't anybody cook for themselves anymore? Go home, watch the Olympics, get a life, just don't ask me for a pizza anymore today!
When we finally got to breathe a sigh of relief, the smiles started coming across our faces. We did well, I think. We patted each other on the back with words of "great job everybody." Then the mess appeared in our eyes. It might have rivaled hurricane Katrina. So, we have a few bugs to work out. Let's not go over it now. We'll fix it next time.
After an hour of clean up and packing the trucks we hurried home to change out of our battle fatigues and go for a swim. Sheri was counting the cash. "Huh," we broke my goal. While sifting through the destruction of the day, Greg finds a back pack that had another $472.00 in it. OMG, we broke the our goal in grand style. Apparently that was an earlier stash of cash that we had emptied because the cash box was getting full. It was that kind of day, a few surprises like cut fingers and a friend there to help bandage the cut. A whip cream canister used on the dessert pear pizzas went wild in the condiments and shot all over the gorgonzola while the health inspector was there.  Even my brother from Oregon dropped by on the way home! I had a couple of burned pizzas that had to be re-fired but with some great teamwork we made it through.
Yes, it was intense. Intense heat, intense crowds, intense work but mostly intense comraderie as we pulled together to make our debut a success.
Oh, by the way, I'm still cleaning equipment, utensils, clothes, table cloths etc. making a cash deposit (finally, after all the out-going expenses) and now getting ready for next Saturday's Soul Food Festival in Stockton. Putting together a food order, more cleaning, resting and looking to work out some of the bugs. No pear pizzas next week but  this time but I'm thinking maybe a Cajun sausage with red, yellow and green peppers. More to my style!
at 11:56 PM 2 comments:

I can't believe more than a month has passed since my last blog. We've been so busy jumping through the hoops that our wonderful government leaders have set up for any small business trying to get it together. Any of you that have been through it know exactly what I'm talking about. Add food to the equation and more agencies want their share of the yet-to-be-earned profits well in advance. I won't get into the whole bureaucratic bull---- that speaks double talk in a foreign tongue but just to give you an idea, the health department requires fly netting on all four sides of the makeshift kitchen under the canopy when doing events in public areas. OK, I get that. However, when they go on to say you can have one side open to work the BBQ, pizza oven or whatever do they even remember that flies can fly and easily go around to that opening and get in anyway? Why don't they just have us post it four or five languages in big red, easy to read lettering that says, flies are not allowed in the kitchen area? It would make as much sense! Alright, I'm getting sarcastic but at least I'm making sense!
Much has progressed since buying the pizza trailer. Papers are getting signed, forms being filled out, questions are getting answered, website being constructed, fees,  distributors sought out, advertising, fees,  printing, safety issues, fees, permits, fees, DMV, more questions, more answers and on and on.
So, you ask, "How's the pizza business going, Vince?" Do you want the long answer or the short answer? Short answer: "It's going great!" Now the long answer. We have 2, possibly 3 events lined up for the end of July and early August. The 40th annual Courtland Pear Fair in Courtland, CA along the river in Mayberry, uh, I mean Courtland will be our first professional gig. It's a one day event with a car show, parade, Pear Queen and food vendors using...guess what! Pears! If you guessed it, then I suppose you've been to it before and already knew the answer.
Next question will be, "Vince, have you ever made a pizza with a pear in it?" Obvious answer is, no, I haven't but I am going to be making a couple of them for the Pear Fair as requested by the event coordinator. One will be a savory pear pizza using gorgonzola over an olive oil coated dough, thin sliced proscuitto and thinly sliced pears, topped with walnuts. Yes, it's been done before and no you won't find it at Pizza Hut.
The other will be a dessert pizza. This one I really liked and we have done it. Nutella goes on first, thinly sliced pears, pecans, and then topped with whipped cream or powdered sugar after it comes out of the oven. Wow, what a treat for dessert lovers!
On August 4th we will be doing the 4th annual Soul Food Festival at Weber Point Park in Stockton as they are evolving into an international food event and welcomed us warmly when we told them we had a mobile pizza business. We have the option of designing a soul food pizza for the event but are not required to. However, we have been working on the menu and trying the basil pesto pizza with mushrooms or fresh tomatoes and another we have tried called Bacon and Bleu which quickly became one of my favorites using ranch dressing, bleu cheese and bacon. Oooooo that was good! 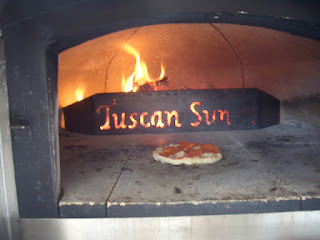 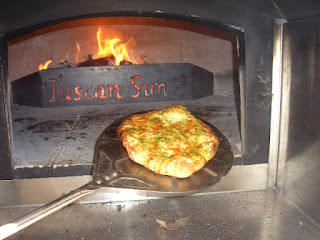 I also got the website up and running: http://tuscansunpizzaco.com should get you there. Hopefully we will have some event photos to post once we've done an event or two. If you wish to check us out on Facebook we will try to keep it active and current. I'm not a Facebooker nor do I even know how to navigate the site but a lot of people do look there so I'm trying to reach the masses. Please pardon my Facebook naivete when checking it out. I suppose I'm old fashioned and would rather talk to people in person and not just in a 150 words or less. I suppose, maybe I should count my blessings that all these government agencies don't require you to find them on Facebook.
at 10:34 PM No comments: