Saturday night did not disappoint. Along with several friends, we made it to Pizza Rock at the K Street Mall and put our names down to be seated. The place was packed but as we waited to be seated we got to watch the new and young pizzaiolos make their pizzas in a wood fired Pompeii oven near the front door and enjoy the heat emanating from the fires. Tony's Table was off to one side which sat 10 people with reservations. We were led to the back of the huge dining area past the huge mural of Pizza Rock's  Creation by Carlos Lopez and were seated up front just a few feet with a view of the kitchen and the man behind it all, Tony Gemignani.
Sheri & I had come prepared to meet the master. I had removed Tony's framed menu that hung in our kitchen from Tony's in San Francisco and rolled it up carefully in hopes of getting him to sign it. Also, I had made him an 8 x 10 color glossy of the photo from the most recent blog (Mr. Respect the Craft) to give him as a reminder of our visit. Taped to the back of it was my mural postcard in hopes of him thinking of me the next time a mural might be needed. You know, Murals by Vincent, with a little guerilla marketing! 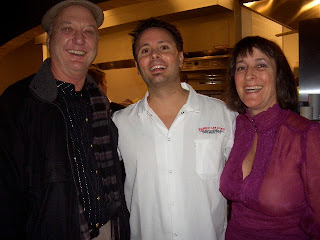 As I had excused myself to go to the restroom just before sitting down, our friend Dean rushed in to let me know Tony was at our table! Hurriedly I zipped up and scooted out there only to miss him. I felt like Ziggy, When opportunity knocks, I'm in the bathroom. He did return though after dropping off a complimentary side of garlic fried green beans and came over to ask what we thought of them. Being that it was opening night he may have been confused in thinking our table was Tony's Table. We mentioned to him that we were glad he was establishing himself in Sacramento and that we didn't have to drive all the way to San Francisco to enjoy one or more of his pizzas. At that moment I handed him the envelope with the photo and business card...then it occurred to me, he might think this is a summons or papers being served on him! OMG! As quickly as the moment passed he removed the photo and gave it a chuckle. Seizing the moment Sheri and I jumped into the frame and had our picture taken with him. Just then he asked us if we've ever tried his calzone. "No, we hadn't," was our response so he bought us one to give it a try. All I can say is, it was the best calzone I have ever had. Bar none. 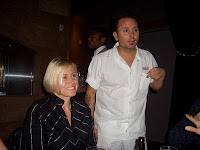 Later as we were diving into his Cal-Italia, his award winning Margherita and a Pesto based pizza called Primavera plus the baked calzone (called the Brooklyn), a roar came up from behind us when one of the pizza acrobats entertained the crowd with his super acrobatic pizza spinning skills. Up in the air, behind his back, under his leg and rolling down across his shoulders to the opposite hand, this dough flew at supersonic speed. What a show! I've seen it on You Tube and TV but to witness it in person and close up was like watching the Blue Angels perform in person. 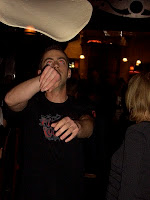 Meeting Tony was so cool. I'm not an autograph seeker or a celebrity watcher. I think the last and only autograph I ever collected was from Lt. Carpenter (Bob Hastings) from McHale's Navy when I was about 12 years old but Tony is just a regular guy, down to earth, classy and very friendly. I don't think he even knows what a superstar he is.

As far as I am concerned, we had the vantage point next to the kitchen and closer to the action than the soon-to-be revered Tony's Table. I can't wait to return with friends and family and have one of his Brooklyn calzones all to myself.
Hey Tony, you have my business card, give me a call, let's do lunch, and I'm buying!
at 2:32 PM No comments:

A recent article in the Sacramento Bee told about a new pizza place in town featuring Carlos Lopez (muralist) who I have had the pleasure of meeting, and his latest creation, coincidentally being the Creation of Man featuring Adam and of course, God! It measures 18' x 40' on the ceiling painted 25 feet high using the same ten colors that Michaelangelo used from his palette some 500 years ago on the ceiling of the Sistine Chapel. Carlos however, painted it with a bit of a twist to it. God is handing Adam an electric guitar, hence the name of this massive place called Pizza Rock opening on K Street in downtown Sacramento Jan. 14, 2011.
On either side of Pizza Rock will be connected to the Dive Bar on the right as you face it and District 30 on the left which will provide music, drink and lounge. Pizza Rock is brought to us by our hero of pizza, Tony Gemignani, multiple world champion pizza tosser, pizza maker and celebrity. Yes, pizza fans, he is coming to Sacramento in a huge way. In addition to being able to turn out 500 pizzas per hour in multiple style ovens, (Yes, you read that right. I said, 500 pizzas an hour!) Tony and other pizza acrobats will dazzle us with pizza tossing skills unknown to mere mortals. 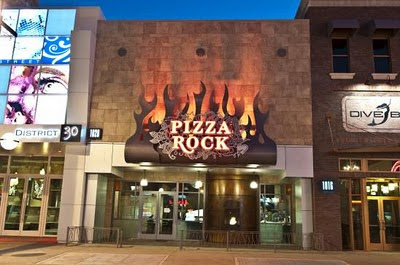 Mr. Tony (Respect the Craft) Gemignani is bringing his world championship pizza to us! Only VIP's will be attending on opening night so I will have to wait to be dazzled. His list of pizza related accomplishments fill several pages from championships in making the best Margherita pizza (beating the Italians, by the way) to the Triple Crown of pizza-making (which nobody has ever done-not even the Italians!) to 8 time world champion pizza acrobat to the Guiness Book of World Records and his own Pizza School actually sanctioned by the Italians as authentic.

Recently, he appeared as the Keynote Speaker to the International Pizza Expo in Las Vegas speaking to the crowd of media, pizzaiolos and pizza store owners. He hints that Tony's may be moving to other parts of the country as well and to watch for his pizza coming to the frozen food sections at supermarkets near you. Way to go Tony!

Had I been asked to paint this mural, my interpretation may been slightly different with God handing a pizza to Tony and maybe with a few words of wisdom to the soon-to-be master.
Tony is a one man pizza promoting machine that has become a giant in the industry. I'm wondering if God might be on his VIP list for the grand opening of Pizza Rock? 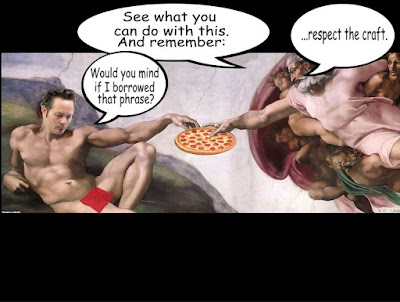 After nearly two dozen tries with experiments, twists and the occasional tweak, I found out what I should've thought of months ago. Don't give up! 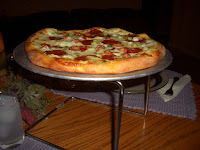 I started fresh again and decided I wasn't going to let the pros have all the fun making a white garlic pizza sauce. One of many recipes that came close started with a whole white onion and chopped it with grated garlic cloves and said to saute' it. It taste-tested pretty darn good but was very lumpy due to the chopped onions. The twist I put on it was only slightly saute' in butter but don't brown the onion/garlic mixture. Add desired amounts of salt & pepper then dump it in the blender to puree after adding some heavy cream or at least half & half. After it becomes consistently smooth, put it back in the pan to thicken it with a small amount of cornstarch then bleeeeeeeeeeeeeeeeeeeep! Oh, I could tell my secret but for now I want to test it a few more times before making it public. I think it will rank up there with Round Table's Italian Garlic Supreme pizza.
A friend, who used to work at a Round Table decades ago, has been given the entire recipe to make and taste-test my formula and procedure. Once he has tried it and approved it I think I will have the secret solved. 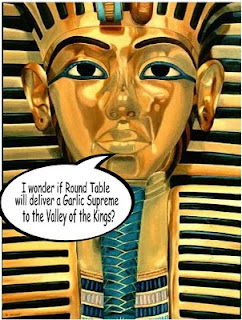 At this point I'm not looking to change their pizza toppings that go on the Garlic Supreme as I can't think of any better combination than what they have put on theirs...except maybe the tomatoes. The tomatoes make for a nice colorful pizza topping to the green onions, small amounts of pepperoni and Italian sausage, but they could be swapped out for anything else that is red, say red chili peppers or red onions. Just not a huge fan of cooked tomatoes other than in a sauce. In keeping that particular topping red it repeats the colors of the Italian flag in a different way than the Margherita pizza was designed to repeat the colors of their flag originally when presented to Queen Margherita. 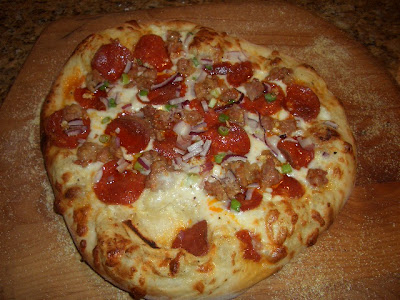 If you are a fan of garlic then it might be worth mentioning that garlic has been around for 6000 years and clay models of garlic were even found in King Tut's tomb. It has been revered as a method to repel vampires, and as an aphrodisiac as well. Good or bad, it has a long history in homeopathic remedies as well. Lois Pasteur verified that it has anti-septic qualities, as well as anti-bacterial. It also has the ability to ward off fleas and mosquitoes. My favorite side note is that during the early part of the 20th century some references have been made about garlic as the Bronx Vanilla and Italian perfume! It is possibly the number one healing plant known to man. That alone should qualify it as Garlic Supreme in anybody's book.
at 7:21 PM 2 comments: