A Dickens of a Fair

Dickens was good to us. Elk Grove had their 25th anniversary of the Dickens Faire. We signed up to bake pizza and pulled out our Civil War outfits for the event. Since we are civilian Civil War re-enactors it wasn't a stretch to pull them together with a bit of a tweak to appear as Victorian era folks. A larger hat, a different cravat, (that's a tie, for those of you who don't speak Victorian) and some comfortable brogans. (shoes)
The Victorian era spanned several decades from 1837 to 1901 during the reign of England's Queen Victoria. The Dickens era fell well within those decades from 1836 with his first successful novel The Pickwick Papers to 1870, the year in which he died.  The American Civil War however, was also within those two periods lasting from 1861 to 1865. When I think of Charles Dickens I think of his novel, a Christmas Carol as do most people, I believe. Who can forget Tiny Tim, Bob Cratchit and of course Ebeneezer Scrooge? Not to mention the ghosts from his past, present and future. I always enjoyed that story whether I was reading it, watching a theater production or viewing Mr. Magoo as a child with the voice of Jim Backus playing the roll of Scrooge. Oh Magooooo, you've done it again! 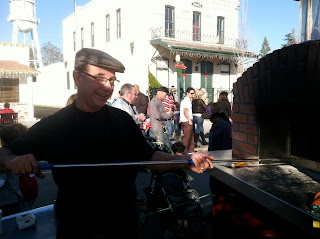 When ever a theme is mentioned I'm first in line to be a part of it. Dickens Theme? Piece of cake...or pizza or something. Sheri & I didn't hesitate to dress the part. Our partners even got into it with their articles of clothing although I had to remove Greg's baseball hat and give him a proper period hat. Not a problem, any good re-enactor will have multiple accessories to change his appearance or help out a friend. My red satin vest is still at the dry cleaners though trying to get the pizza residue off of it. 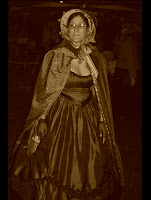 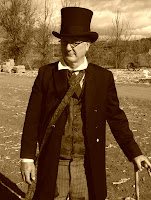 The outdoor ice skating rink that was promised to us didn't freeze in time. They blamed it on the equipment as
any good contractor
would. It never really mattered. The street faire was one long block long and we were in the middle of it. Everybody had to pass us twice as they strolled along on a sunny and crisp day. People were hungry and we were ready. Our final pizza count was over 200 by the time we shut down at 4:00 for the parade to come through. By Dickens it was close though, as we ran out of fresh dough, cheese, paper plates and napkins. That was a first for us! I even made a cheese run to keep us going until 4. On previous occasions at the Elk Grove Dickens Fair we had been disappointed by the attendance when visiting it. I just believed the ice rink would draw more people in. It wasn't the ice rink though but the sun bringing the people out and letting them have a dickens of a good time. They told us to expect 10,000 people. I think the organizers did a dickens of a great job and were amazingly prophetic. (I guess I've used that dickens word to death by now!) 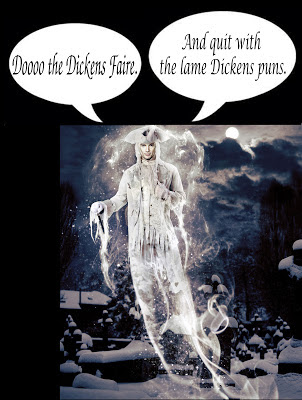 If the ghost of Christmas future was to show at my bedside I definitely would bake pizzas at the  Dickens Fair again next year!