Over the holidays Sheri & I went out to the Marin Headlands beyond the Golden Gate Bridge with my brother, Greg, his wife, Joani and their two girls. Braving the wind chill and hiking into the coastal hills on a 2.9 mile walk (uphill, both ways) which felt more like 3 miles, we worked up quite an appetite after the obligatory family photo with the ocean in the background and the beautiful sky all around.
Back into the vehicles and then across the bridge to Oakland and to the corner of  College Avenue and Oak Grove Avenue where Zachary's Chicago Deep Dish Pizza is, we all trucked. It was a Monday night so we figured on easy parking, an easy table, no wait, and a quiet evening enjoying conversation and pizza. Oh, were we surprised to find that we had miscalculated their popularity. This employee owned pizza place was not only jammed with enthusiastic pizza lovers but a waiting line had formed and a list of people waiting to be seated was being taken. Sure it was the Black Monday after Christmas and people were out returning their unwanted Christmas items for gift cards and bonus points, but I doubt anybody was returning an unwanted pizza. I was glad to see that Albert Grande of Pizzatherapy.com had both Zachary's of Oakland and Berkeley listed on his site of the best pizzas in California! I couldn't agree with the comment more of what was mentioned, "That you could never get as ripe, red tomatoes in Chicago as the ones on Zachary's Pizza." And to agree with the comment further, "It is the best deep dish pizza I've ever tasted." 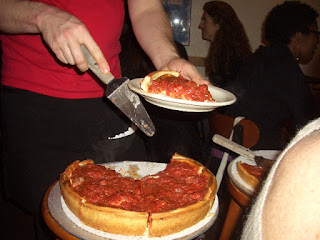 It's always a better idea, I think, to order two medium pizzas for 5 or 6 people than try to get everyone to agree on one large one, especially when you are outnumbered by girls 2 to 1. This way, we guys can order the carnivore platter with the heavy meats. The girls can try the man-food pizzas with all the man-food spicy meats and we men can dabble with the lighter vegetarian pizzas. I have learned that the girls rarely reach over for a thick slice of pizza piled with carbs, protein, oxidants, MSG or whatever, so even though it looks considerate of us guys to offer some to them, we know in effect, that they most likely won't take any so that makes it that much more for us! Yes! I think it's called, manipulating the outcome. 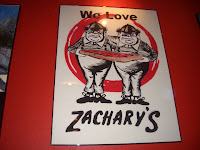 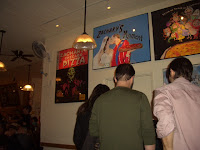 In addition to their great pizza, Zachary's offers an annual art contest where the customers can enter and create a piece of art. The winning piece selected will be framed and hung on the wall of the restaurant. This has been a Zachary's tradition since 1980. The walls are colorfully lined with numerous pieces of customer artwork usually mentioning Zachary's in their work. Sounds sort of like the Blue Moon gig I will be doing in the near future involving the patrons.
Next time I think I will skip the 2.9 mile walk over at the coast and just go to Zachary's so we won't have to wait in line for a table. Walking is so over rated.
at 12:28 PM No comments:

Make Me One with Everything

I'm feeling this void, this vacuum of not having too much to do this Christmas. The last three out of four Christmases we hosted, with the last being the Danish Christmas Feast. Usually by this time we are elbow deep making dough, stuffing a duck or shopping for groceries, decorating and sending out the Evites. This year is a bit different. We were the guests as my brother and his wife hosted the traditional family Christmas dinner. While it was very nice, with BBQ ribs from the Outback, courtesy of Mom Larsen,  I miss the whole production which almost left me with an empty feeling. I thought to myself, should I design a Christmas pizza? Should I make some Danish Kringle or some of my favorite Deen's beans that always were served at Deen's Christmas party at the paint store I used to buy from? I think pizza is the right answer to fill the void. It reminded me of a short story about the Dalai Lama.  The who? You know, the Dalai Lama from Tibet, master of the spiritual side of life and has an answer for those who are feeling they are lacking something? Anyway, it goes like this: The Dalai Lama walks into a pizza place and says, "Make me one with everything." That's it. I told you it was a short story! I know, you had to read it twice before you got it. Didn't ya?
I'm thinking that before I get a little crazy in the kitchen with the flour and the cheese etc. I should head on over to K Street in Sacramento and see what's cooking over at my favorite pizzaiolo's place, Pizza Rock. Even if there isn't a Christmas themed pizza on his menu I know that something on his menu will inspire me to try and then go home and try to copy.  Heck, maybe I can scout out his location for Blue Moon Beer and follow up with doing one of the Blue Moon campaign gigs at Pizza Rock.
I just got the contract yesterday to sign and send back to Blue Moon which makes it official that I will be one of many artists selected across the country that will be enticing the patrons in selected drinking establishments to indulge their artistic side and help to create a Blue Moon masterpiece on canvas. They will be sending me to Denver for a brief training and getting my feet wet before I am to set foot in a tavern at Happy Hour and try to pry the patrons away from there i-Phones, Droids and laptops. What a cool concept! Actually making conversation and interacting with other human beings minus any texting, virtual conversations, blogging, GPS,  Facebooking or anything even remotely digital! I wonder if that's possible? Maybe people could do some art together, in person and connect on a reality level while painting the Blue Moon Beer! (click & check out these commercials on Youtube)
The world is a different place from when we were kids. I can remember the old nuns telling us how easy we have it as kids back in grade school. Because when they were kids, they had to light the gas lamps, chop the firewood, feed the chickens and milk the cows all before breakfast and then walk 6 miles through the snow, uphill, both ways only to come home and resume their chores before doing any homework and then go to bed to start the process all over again the next day.
Well, I could practically match them in their story telling. As a kid growing up in the 50's and 60's we had it tough too. We actually had to get off the sofa to change the TV channel. Everything then was in B&W too! In addition, we had to wait until Saturday morning to watch cartoons. Can you believe that?! Back then we only had 10 channels and only 3 of them came in clear.
If Dad wanted to park the car in the garage we had to get out of the car to open the garage door for him and then wait until he was in to close it and lock it from the outside. I'm telling you. Times were tough!
We didn't have cell phones. We had to go into the kitchen which was the only phone in the house and use a rotary dial. We didn't have speed dial. Our phones didn't hold music or turn into a GPS. If we wanted to take a picture we had to buy film and load it into a camera, preferably where it was dark, then wait for it for 2 weeks while the drugstore developed it into a photo which we had to pay for!!! You want to talk about rough? Yeah, we had it rough.
For some reason though, pizza has survived the digital age and we can still get a good pizza down at the corner pizzeria or bake one at home over an undigitalized fire.
Making a pizza at home or even ordering a pizza out is still the best connection I have to the wood smoke and home cooking from eras gone by. As for the six feet of snow?!? I think not. We were young but not that stupid.

BTW: I will be putting together a list of people who might be interested in coming out to a place in Sacramento and dipping into the paint and wetting the canvas with me. Have a beer, do a little art and share a few good laughs. Let me know and I'll get the specifics out to you of when & where in 2012.
at 6:13 PM No comments: