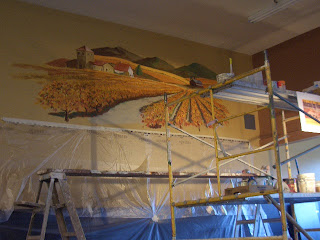 Work is finally coming in from all directions. Blogging has slowed down in order to accommodate the work load.
I just completed a set of murals for the new Grocery Outlet in Davis. Over their wine section, I was asked to paint a Napa autumn vineyard scene and above the other wall a scene of the campus at U.C. Davis in the spring time. Next to that was a logo of the U.C. Davis Aggies and mascot. I worked for two weeks up on the scaffolding while the other workers completed the installation of shelving, freezers, and finally the stocking of the shelves. 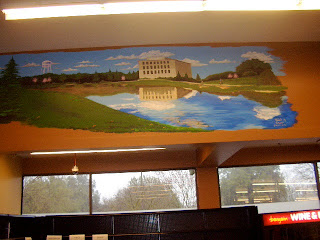 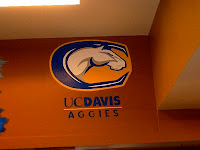 The Grocery Outlet in Elk Grove has been a great source of cheeses and wines for me. Being that it is an outlet store you never know what they will have each time you shop. I have found some great fresh mozzarellas, goat cheese, feta, Havarti, and Tillamook cheddar in their dairy section along with sliced pepperoni, salami, sausage and Proscuitto in their meat section and not to mention the fresh onions, mushrooms and peppers in the produce section all at great prices. The wines that I purchase are generally from all over the world although I do favor the California wines from Napa, Amador and Lodi.
I have been trying to get the owners of the Elk Grove store to have me do a mural for them in their wine tasting loft upstairs but to no avail so when Grocery Outlet called I had assumed that it was my local Elk Grove outlet. Not so! I was surprised to hear the corporate office calling about a new store in Davis being built and their interest in a couple of murals! I think they were impressed that I told them I love their stores and shop there regularly. I did have to admit later that I do not buy their frozen pizzas as I make my own. I think they forgave me because I ended up getting the job.
Lately we have been hoping to take that trip back East to do some serious pizza tasting at some of the hallmark pizzerias in New York and Connecticut while visiting some long time friends in Lancaster, PA and visiting a few Civil War battlefields in Virginia since that is where my other hobby and interest lie. (See Civil War Pizza blog).
The thought of tasting pizza in New York again but this time with a more educated palette excites me and almost scares me. To think that this is the capital of pizza and I have only been doing this as a hobby for a couple of years seems a bit intimidating. I have to think of some of those poor idiots on American Idol that apparently don't have an honest friend in the world who will sit them down and tell them to their face, "Don't do it, you can't sing and you will only embarrass yourself on national TV." Not that I'm going to make pizzas for New Yorkers or anything like that but to come home and and be humiliated by the thought that I thought I had been making great pizza when all along all I might've been doing is making pizzas for Californians who think anything with tomato ketchup on it is good! So far, none of my ketchup loving friends have told me, "Vince, don't do it, New York has the best pizza in the world, you couldn't possibly hope to make a pizza as good as any of theirs. You'll only embarrass yourself." Or could it be, that none of friends have been honest with me? Naaaaaaaahhh! I make great pizza! Just ask me.

Recently we visited another pizzeria in downtown Sacramento called Hot Italian, Pizza and Panini Bar. It was an interesting blend of Italian cycling, both Vespas and bicycles with pizza and panini all decked out in a stark black & white contrast. They featured a large brick fired oven run on gas and some cracker thin artisan pizzas made in one size only. We ordered the Belucci which was a tomato sauce with mozzarella with fennel sausage and dobs of ricotta cheese. Very authentic combination, reasonably priced, well crafted but not overly exciting. However, I did feel inspired to go ride my bike as soon as the weather warms up once again. The cracker thin crust was amazingly thin so I had to go watch them roll out their doughs while asking the pizzaiolo a couple of questions. He actually was hand rolling it to my surprise which was a plus.  Later at home, I watched on TV as some show popped up before me about making pizzas. The place they were visiting was focused on making the thinnest of pizza doughs in the world although I didn't catch the name. When I saw it I said to myself, they must be using a machine to roll it because it was too perfect. I was picturing an old ringer style washer with a hand crank but fortunately they were a bit ahead of me. They used a pasta machine for rolling it wafer thin. I liked their ingenuity. Having never made pasta myself I think I would have thought more about using the old wringer washer if I had been inspired to make pasta or a cracker thin pizza crust in a uniform manner. The story would have undoubtedly have to have been kept secret upon feeding the pizza to anybody or the reactions may have been less than positive.
It's almost worth thinking about it as I do believe it would work but rummaging through thrift shops would prove fruitless in the 21st century or even a landfill. It does bring back fond memories from childhood though going to the dump with my dad on a Saturday afternoon. While he unloaded the station wagon we boys would search for buried treasures. I remember finding in near perfect condition a discarded Corningware coffee pot. It was complete with no chips or scratches and only a little dirty as it appeared to have been left there quite recently. I scooped up my treasure to bring home to Mom. In those days dishwashers were a luxury so anything in need of sanitizing had to be boiled for a period of time, which of course she did. 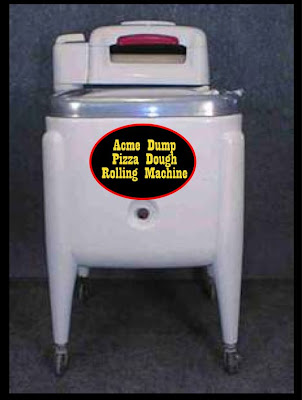 Days later, a neighbor friend of the family was visiting with mom in the kitchen and drinking coffee. I happened to walk through the kitchen at the wrong moment and exclaimed, "Hey mom, you're using the coffee pot I found at the dump!" That, of course, was the last thing she would've wanted me to say but I was quite proud of her for using this freebie that I had scored. By the reaction of the guest you would've thought I poured vinegar in her coffee. Mom was about ready to hit the moon but an explanation to the guest was already over due. I'm not sure that the friend ever came back and chatted over Mom's coffee again but the story lives on. With that lesson still in mind, I think I will steer clear of the wringer washer for rolling out a cracker thin dough. It's a shame one mistimed comment could ruin a great idea.
at 5:02 PM 1 comment: