The Return of the Pear Fair! Pear Lovers Flock To 41st Annual Pear Fair In Courtland « CBS Sacramento-Watch Video below under Reality TV

Ah yes, the Pear Fair! Friend or foe? Beast or blessing? Dream or nightmare?  I'm not certain but it was no fluke. Our measuring stick has been the Pear Fair since our debut a year ago. We haven't topped it since with about a dozen fairs, festivals, home & garden shows and wineries under our belts. Nothing compares to the Pear Fair. We misunderstood it last year and severely under estimated it's drawing power. This year with a years' experience and training we were much more ready for the onslaught of hungry fair goers. We love the Pear Fair and I do believe the Pear Fair people love us as well. We heard so many comments from people exclaiming how glad they were to see us return. That made us feel welcome for sure!
The weather was perfect and not too darn hot. I was ready to do battle with hundreds of pear lovers when on the early morning drive over to Courtland to get set up on the last Sunday of July one of my key workers called in sick. OMG, this can't be happening already. Just 4 people to serve the hungry hoards? We'll make it happen somehow but I'm not sure yet how.
As we were setting up that bright Sunday morning the local news crew was making the rounds and looking for a happy and friendly face. With the news of losing one of my staff I wasn't going to be the happiest one to interview. Fortunately they went over to my wife, Sheri and talked to her. She has lots of experience with public speaking being a teacher for over 30 years so I was glad to see the reporter talking to her and not me. She in turn mentioned her husband was the real owner and so the cameras came over to me. Thanks Sheri!
I did what I had to do and spoke with them when they asked me to make that scraping sound on the oven floor again while I was tending the fire. I guess even the sounds of getting ready sounds good on the news! So, for those of you with a keen ear can actually hear the sounds of me scraping a fire tool over a brick oven floor. No stuntman was used in making this noise and no bricks were injured I'm happy to report. I guess it all makes for realistic TV. Hmmm,  reality TV.  I could just see it now. A camera crew following me around as I make food purchases, fill out vendor applications, pack a trailer and even get a close- up of me when I'm plugging in a refrigerator! How more real can you get than that? Stay tuned for next week when Vince actually bakes a pizza!!! It's got to make for great TV! Check out our little claim to fame! Reality TV (Sorry, there's a commercial just before the video!)

I'm getting a little side tracked while fantasizing about TV stardom. Should be TV Stardumb I think.
In any event, the Pear Fair has been our high water mark since last year. I really started to doubt myself that the new crew I have. I had told them that we did an estimated 300+ pizzas last year. Are you sure Vince? Sounds like a bit an exaggeration all of a sudden. Did we really do that may Pear & Proscuitto pizzas? Was I stretching it a bit in my story telling? The most since then was probably the 435 pizzas we did in a 2 day event at the Old Sugarmill Winery in Clarksburg last February.

Meanwhile as we were reaching a critical breaking point, Sheri called our sick girl after finding out the real truth that she was hung over from the night before of partying and drinking and insisted she come in as she had made a commitment to be there. She showed up in good spirits about 1:30 and we worked her tail off. Now that would've been good reality TV!
The Pear Fair people are great. No problems, issues, late notices, surprises. Just good people doing what they do best. Putting on one helluva pear fair like they have for the past 41 years. No foe, beast or nightmare here, just a great showing of people bringing with them a healthy appetite for some pear pizza or anything else pears can be converted into. Personally, I like converting the pear pizzas into cash! Wink, wink!
at 1:50 PM 1 comment:

Banjos and Pizzas are for Happier Moments

Many blogs ago I was writing about taking a trip back east, doing the Civil War thing and eating pizza every chance I got. Well, we made it back there again for the sesquicentennial of the Battle of Gettysburg or as others will call it, the 150th anniversary in commemorating the battle where so many young men died. The Southerners would call the war: The War of Northern Aggression and Gettysburg as the high water mark. 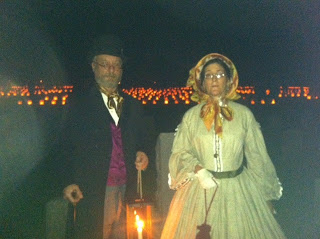 Sheri and I were selected to be greeters at the Soldiers Cemetery or what is currently called the Gettysburg National Cemetery. To be a greeter one has to apply by filling out forms online, providing photos of our 19th century outfits and be willing to stand at the gates in 90º temperatures with skyrocketing humidity and be willing to greet spectators with a cheerful yet somber voice as they entered the cemetery grounds. Hmmmm, cheerful and somber? Don't know if I can do that but I'll give it a try. The Boy Scouts were there to light the 3500 luminaries that glowed in the dark over the Gettysburg dead. We got the chance to meet some of the Boy Scouts and inform them that 100 years ago at the 50th anniversary of the battle that the Boy Scouts actually helped out enormously for the surviving veterans reunion of the battle, both north and south. They set up tents, did their laundry, provided assistance to the handicapped and helped to feed them. These young scouts had no idea that their legacy is connected to the whole ordeal. I was glad to be able to educate them as their troop leaders should have but they probably had no idea either.
It almost seemed fitting that when taps was played that Sunday evening and the 21st century military marched by in perfect order that the heavens opened up and poured down on us in torrents. Almost like saying they were washing away the scars one more time and to start fresh tomorrow.
I learned something about pizza that week in Gettysburg. Pizza is a little like a banjo. A what? Yes, a banjo. You can't be in a somber mood and play a banjo or eat a pizza. Pizza is for happy times like a banjo is for brighter times. It just doesn't seem to be appropriate after walking past so many graves of so many young men who gave their life to preserve the Union and turn to your wife and say, "Ready for a pizza now?" I don't mean that disrespectfully but in reality it's hard not to be moved after seeing so many luminaries and hearing taps being played. Pizza can wait, I thought. 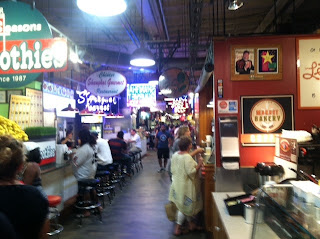 In fact it did wait. Once we got to Philadelphia I figured we would be gorging on pizza at different places every night. As luck would have it our hotel was right next door to the Reading Train Terminal which has since been changed into a food court for 70-80 amazing choices of food types, styles, ethnicities and flavors. None of them were connected to a franchise as it was all real food in the best sense of the word. One night I skipped the pizza for the lasagna which was amazing. Another night we heard someone walk by and raved about the chicken being out of this world so we ate chicken that was every bit as good as we had hoped. Another evening we discovered the German fare and ate grilled bratwurst. There were so many choices, including Amish treats that we don't get at home or at least near Sacramento that we had to try as many as time would allow. We did have pizza in Boston and while in Gettysburg we tried a pub that served amazing food that we needed to sink our teeth into.  Even after the re-enactment we thought about getting a pizza on the way home. However, as Picket's charge ended a couple of rain drops fell followed by a few more and then the heavens opened up on us. By the time we reached our car about a mile away our 19th century outfits were drenched to the bone. Sheri was smart enough to bring a change of clothing. I, however, am the eternal optimist and said it wasn't gong to rain. That left me either in soaking wet clothes or strip down to my boxers and t-shirt which were only partially wet. We found the first place we could called Lincoln's Diner, walked in a little sheepishly and sat down wearing my solid blue boxers. Nobody even noticed.  Pizza wasn't on the menu so I settled for the meatloaf. Pizza will have to wait one more time. It did wait...all the way until we finally returned home and had 6 days to prepare for the return of the Pear Fair. The amazing Pear Fair that we cut our teeth on in our opening pizza debut a year ago. Was it a fluke, could we really have sold close to 360 pizzas that day and was it to  repeat like the year before? Only 6 days to order the food, repack the rig, get the crew together and bake pizzas like there was no tomorrow. Being a guest greeter at Gettysburg was one thing but cranking out the same number of pizzas again this year would prove to be quite another.
To be continued in: The Return of the Pear Fair.