What do you do with an oven that has reached 900º over the last 3 days selling over 300 pizzas to hungry Home & Garden customers? You do what other pizza oven owners have told you to do. You've closed it up. It's surely cooled down enough on the hour drive home and sat in your driveway another 15 hours so it's got to have cooled down enough. The coals are out. There's no smoke. Just sticking your arm through the opening tells you there isn't much hot air in there so you go buy a beef brisket, season it, put it in a Dutch oven with beer and potatoes and onions and carrots. Pop the lid on and slide it into the oven for a nice slow cook of several hours and forget about it. Did I say, "Forget about it?"Apparently I wasn't supposed to forget about it. On my way out to the mailbox I got a whiff of food cooking in the air. No, that was food cooking. I ran back into the house, grabbed some pot holders and ran back out. By now, moms are walking their little kids home from school and I must've looked panicky. I dashed between them, pulled off the oven door and quickly removed the lid to the Dutch oven. At this point a picture is worth a thousand words. I didn't need a thousand words. Only one. Burned. Kingsford probably would've recognized it and maybe even applauded me. "Honey, dinner's ready!" Well, I knew better than to yell that out as the neighbors surely would've known otherwise. The aroma had turned to odor. Those school moms sure would've been laughing. I should've been but I had to recover quickly. What to do next? Go back to the store, buy another roast and try again tomorrow and this time keep an eye on it.

I thought to myself,"Stick with pizza." Yes, pizza makes more sense! So, I was hoping to find more uses for my mobile pizza oven. Finally it dawned on me. Pull out the books and start checking out more pizza recipes. I found one that I thought looked promising. Chili Pizza! Yuba County Fair Grounds at the Home & Garden Show was my testing ground. People love chili and people love pizza. Why not try them together? With a batch of my 5 hour chili with no beans in it I decide to put it on the menu. A scoop of semi-spicy chili on the dough, a few chopped onions and sprinkled with some cheddar cheese and some jalapeños by request, I created my first chili pizza. Friday we advertised it and we sold one. My crew laughed at me. However, we had 2 more days to try it again. By Sunday afternoon we had sold out! My crew had finally got up the guts to try one, well, maybe a bite of one. "Oh, that's good!" they exclaimed. Too bad they hadn't tried it sooner!

The Elk Grove Chili Cook-off is coming up in June. June 8th to be exact. I was told by the event co-ordinator to offer chili if I could. Apparently you can taste the chili from the different competitors and vote on your favorites but you can't buy a bowl of chili. What's the point of that? I had a banner made up specifically for the cook-off saying Wood-fired Chili Pizza. I'm predicting that we sell more chili pizzas than any other. As for the wood-fired brisket, it's not going to make it on the menu soon. 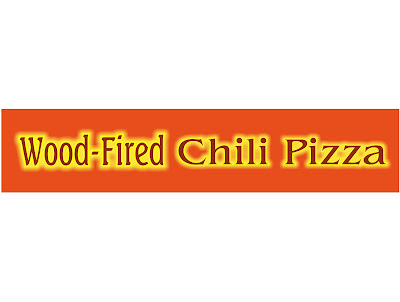