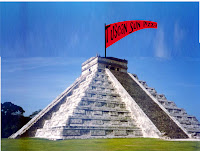 2012. The Mayans may have been wrong or maybe just misunderstood. December 21, 2012 came and went like any other day of the year and we're all still here. Not that I'm surprised at all as I could've easily purchased enough dough, cheese and food for 1000 people prior to 12/21/12 and not paid for it until after the world ended. I had enough faith in our modern day calendar to go ahead and pay for it upon pick up as I usually do. So what's up with those Mayans?  Maybe their calendar was off by a few millennia. Should've had an Iphone perhaps. Either way, we're still here and I have enough pizza to feed an army right now.
Deer Valley High School in Antioch called us to do pizza and told us that they were so busy last year at this girls' national basketball tournament their snack bar couldn't keep up with the demand of Ho Ho's, licorice sticks, Pepsi, Ding Dongs and Twinkies that they thought we'd make a killing. We were one of 2 vendors just 10 steps away from the gymnasium doors. It sounded promising. After 2 days of dismal sales we bailed. The hot dog vendor hung around to Saturday but when I checked on him at 2:00 that day he had only sold 15 french fries, 9 hot chocolates, 2 hot dogs and 1 hamburger. The food won't go to waste as both freezers are jammed full but the fact that we were the best prepared that we've ever been was disappointing. It's taken us several events to work out the bugs but this time we had it all. We had Christmas lighting, work station lights, rubber floor mats, space heaters, a new cash register, flyers, loads of paper plates, napkins, extra help on call and plenty of enthusiasm.
I had even cooked up 5 gallons of my favorite pizza sauce in a new 20 qt. pot I just purchased so we didn't have to use the institutional pizza sauce. Man, we were ready!
So, forget about the basketball tournament and we'll turn our efforts towards other events. The Artisan Cheese Fest in Petaluma looks like fun. There's an Amador Valley Winery who is interested in us for early March and then there's a soccer tournament in Sacramento with plenty of open dates and no pizza vendor on the schedule. Even Lodi's Street Fair contacted us again about selling pizza in May! 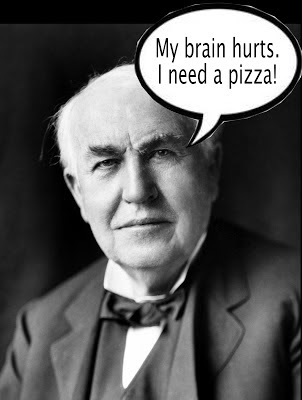 I don't feel like we failed only that the stars weren't aligned or something. Maybe I should've consulted a Mayan. Heck, Steve Jobs' computer "Lisa" was a failure! When the copy machine was invented and shown to Xerox they said, "Who needs copies? If so, we have carbon paper." Even Edison tried 10,000 times to get the lightbulb to work before he succeeded. He eventually told a reporter who asked him if he feels like he at first failed. Edison looked at him and said, "No. I now know 9,999 ways how NOT to make a lightbulb."
Like Edison, we will keep on keeping on. Sure, the freezers are full right now but if you look at the bright side, even if the world was to end tomorrow we can have as much pizza as we want  going with us into eternity. Let's see, our pizzas cook at around 900º. I wonder what the temperature of Hell is?
at 3:32 PM No comments: