Home is where the hearth is

People aren't surprised when I tell them, "We're in the pizza business now." I think I am surprised though! This Pizza Journey started over 2 years ago with some research, experimenting, a bunch of interest and a few silly blogs along the way as well as a few slices of pizza too and not knowing where it would take me. Now comes:

My brother and I connected with a  family in Spokane, WA who weren't even thinking about selling their business until my friend, Marty Martin shot them an email with 3 questions: "Are you happy with your rig? Are you happy with the company who sold it to you?" And thirdly, "Would you be interested in selling it?" Marty had told me, "if you get me a list of 100 owners' emails, I will find 10 that are willing to sell." I was able to get only 8 owners' email address and he fired off the 3 questions to all of them. One of the two who responded who were moving back east and we ended up buying the rig in Spokane, pizza trailer and the whole business at a huge savings. The rig was only 11 months old, in perfect condition and included everything for a turn key operation. 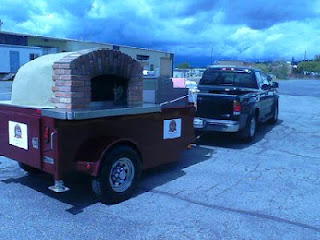 It was about a 20 hour drive up to Spokane so I had Greg listen to a CD called the Legends of Pizza with interviews of famous Pizzaiolos interviewed by Albert Grande. The opening song before the interviews was a band singing, "Ima lovin' da pizza, alla da time." It really sticks in your head! We spent the night at another brothers' house in Bend and continued north the next day. Once we arrived in Spokane we called the owners and asked if we could see the rig the evening before the purchase with which they had agreed. Upon knocking on their door, we heard a loud bark from a big dog. I said to Greg, "It sounded like a Golden Retriever bark," somewhat jokingly. "If it is... they're good people." Sure enough Rocky, the 120 lb Golden Retriever greeted us at the door with a tennis ball in his mouth. Another black dot in my book! The next morning after a rest at a Motel 6 we anxiously got our stuff together to make a career change from 30 years of construction to the food industry. 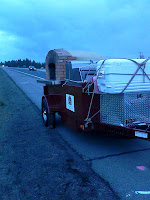 After inventorying everything and throwing in a bunch of Washington grown apple wood we had to get Greg's truck over to a place to wire in the electric brake system on his truck that attaches to the trailer for the long downhills across the mountains. We were naive to think a half day's work and a few hundred bucks would cover it. The shop worked meticulously on it all day and into the next. They held the truck for 27 hours. We were able to get a ride to a nearby Rodeway Inn and spend the night, eat at a truck stop across the street and walk back to the trailer hitch place with our suitcases in hand. They wrapped it up at about 3 that afternoon and finally we were on the road out of Spokane. Eight miles to be exact when his truck shut down on the freeway. After several futile attempts to revive it, we called AAA. First, his truck was loaded on the flatbed and the pizza rig was in tow. Back to the trailer hitch place as we suspected they might be guilty of causing the problem. Another night at a Ramada Inn this time and they would analyze it and hopefully correct the problem. We were told the engine's computer had shut down and they had checked the state of WA for another to no avail. Even if they could find one they would not be able to program it, so, we again, had it towed to Toyota. 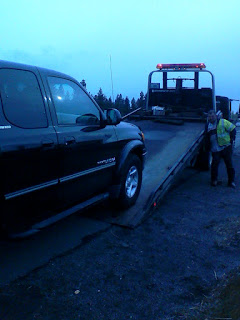 Upon dropping it off at Toyota they told us that they've never had a computer quit on them and this would be a first. Was that good news or bad news? Toyota then told us it would be 4 days before they could get another either from southern California or Kentucky even with overnight express. Our hearts sank. It was definitely bad news. They drove us back to the hotel we had vacated earlier and we attempted to book 4 more nights. They were sold out due to a marathon in town. Now what? Within minutes they called us and told us a room opened up and we were in, even if it was a smelly smoking room. We grabbed it.
We were on foot so we walked a mile down to a Starbucks as we had 4 days to burn and no place to go. After trying to get our brains reprogrammed for 4 more nights in Spokane, the additional money it would cost for hotel, food, and repairs plus the time away from our families we settled in for the comfort of a hot cup of familiar coffee. We sat for about an hour trying not to talk about $2000 or more spent on a new computer when my phone rang. It was Toyota. "Your truck is ready to go!" said the cheerful voice. We stared at each other, we stared at the phone and we couldn't believe our ears. First thing we have to do is spend the night and get rested up since it was already 4:30 in the afternoon. Then we have to cancel the next 3 nights at the Ramada Inn. Toyota said they would come and get us but in our jubilation I told them we would spend the night and pick it up first thing in the morning. Had I been thinking clearly we would've picked it up now, spent the night anyway and at least have some wheels to go out and eat or to a movie or something. It didn't matter, we were ecstatic. Toyota delivered! They found a problem with the wiring coming out of the computer that had been rubbed raw by the fan belt but not visible to anyone. They knew we were a long way from home and getting a new wiring system would take days so they soldered it up, water-proofed it and tied the wires back away from the fan belt. $220 is all they charged us! A great big black dot once more! We were going home! We had planned originally on one night in Spokane but ended up spending 3 nights and nearly spent 6 nights. I'm not knocking Spokane but spending 6 nights in any city that isn't home or at least Kona or Waikiki is a long stretch!
I had called a friend of 32 years near Portland earlier on the trip whom I wanted to see, get a home cooked meal and roll our sleeping bags out on the floor and told her about our (mis)adventure.  I really wanted to see Carla and her family but this trip was taking turns left and right that were unpredictable. As it ended up, we did get to stop at her place with a bottle of wine, get a home cooked meal and visit for about 90 minutes then hit the road again. It had been 6 years since I saw her last and it was just like seeing her right where we left off. She and her husband, Gary got to see the rig, ask a few questions about it and then we had to say goodbye. The return trip was uneventful so we enjoyed the boredom and lack of surprises. And now, just like Dorothy said, "There's no place like home." Oh yeah! "Ima lovin' da pizza, alla da time!"
at 1:26 PM 3 comments: