Serendipitous is a word I use every so often when referring to things that seem inter-connected. I use to like to connect-the-dots when I was a kid in those game books and see what the grand picture would be. Lately a series of serendipitous events have transpired that have me once again connecting the dots.
My brother called to have me help him on a job in the East Bay area. Something that has never happened before, in 28 years but I came down, we did the job quickly and went to get a burger and a Starbucks. Our conversation evolved over hot coffee into,"Vince, are you going to paint houses and murals the rest of your life?" Instead of blowing off the question I told him what I would rather do as we get along in age. "A pizzeria would be my choice but Sheri isn't behind me on that after watching too many episodes of Kitchen Nightmares with Gordon Ramsay." "Too much risk and never a day off," she would say. I told him I had seen a couple of mobile pizza trailers on the internet that made pizzas in a 1000º wood fired oven at sporting events, wine festivals, farmer's markets etc. and he started sitting up a bit more straight and listening. Huh! I had an audience!
Greg had been laid off from his construction job after a couple of decades due to a slow economy. I just drove 65 miles to do a 4 hour job because work has been so scarce. Suddenly our words were more enthusiastic and questions and answers flew around back and forth. He was interested in being my partner in a mobile wood fired pizza business. I wasn't even looking for a partner but our combinations of skills and knowledge seemed very compatible. This was the first of numerous black dots.
I just started reading a new book about the building of the Panama Canal. The conversation with my brother was still fresh on my mind. Were we acting out of emotion? Did we really think we should do this? Can we make it and a partnership between brothers work? Then I read the dedication written by Teddy Roosevelt, "Far better it is to dare mighty things, to win glorious triumphs, even though checkered by failure, than to take rank with these poor spirits who neither enjoy much nor suffer much, because they live live in the gray twilight but knows not victory or defeat."  This was written for me! Black dot. By now, Sheri was starting to see the black dots and was as enthusiastic as I was. Mobile pizza trailers are versatile and allow for time off, no huge overhead, and still have unlimited income potential. Another black dot.
Next, of course was money to invest in our new idea. Two years I had joined a class action suit against our home  builders due to a few corners that were cut during the construction of our house. I just received a check from the attorneys for $6,771.29 that I never thought I would see. That's four dots now. Greg, turns 55 in May this year and can access is 401K without penalty. Five dots.
We got busy on the internet and considered the idea of building a pizza trailer until we found The Fire Within mobile pizza trailers that are built in Colorado using a Forno Bravo Oven. I am already familiar with their product since I subscribe to their newsletter. Six dots. Later, checking out Pizzatherapy.com's newsletter I happened to see one of my pizza mentors, Albert Grande, endorsing Forno Bravo's ovens. Wow! 7 dots! This picture is starting to make sense. Not only can I see where it's been, I 'm really starting to see where it's going. Call it planetary alignment, synchronistic, coincidental, divine intervention, God winks, or just dumb luck, I just can't help seeing where it's going. 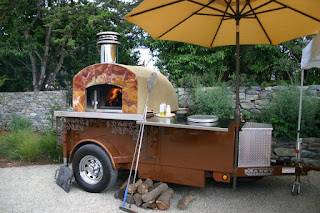 We were able to contact a couple of owners of these rigs to see them first hand and hear what they had to say about their young businesses. One in particular, was owner and operator of Soleil Wood Fired Pizza, Ron Arguello in Brentwood who graciously answered all of our questions when my brother and I and our wives went out to see him. We were all fired up at that point and decided to contact The Fire Within and make the next move. Go home, wait for tomorrow, and order the trailer. As I pulled into our neighborhood there was a gardening truck, it's vanity license plate read, ARGUELLO. Another dot.
Meanwhile, Greg had just learned that his oldest daughter got 4 of her front teeth knocked out in a lacrosse game. Being that he is laid off, his insurance was laid off too. Uh oh, the dots weren't going to connect this time, or so we thought. We were on the verge of sending Colorado a certified check but our affiliate credit union said they can't send it, we'd have to go to our original credit union. A little bump in the road. No big deal, we'd wait a week and order it if the teeth episode didn't kill it financially for Greg. As luck would have it, Greg's other daughter came home from school and mentioned that since Heather had just signed up to be a lacrosse referee she was covered by insurance. Being a player didn't qualify for school  insurance. That bit of oral surgery would've cost about half of what a pizza rig would cost! Another black dot! Even when obstacles seemingly arise they appear to be only imaginary bumps.
That next day I walked into a different Starbucks from the one I go to daily near home and saw a friend I hadn't seen in awhile. He's a negotiator and business man who owns a Dinner My Way franchise and is a small scale Gordon Ramsay type consultant who helps people to reignite and reorganize their struggling businesses to make them more successful. I showed him the picture of the rig we were going to buy and he said, "I hope you haven't pulled the trigger yet." "What do you mean?" I responded. "I'll find you that same rig for less," he said. "No way, there aren't that many of them around but if you think you can, then go for it." I told him with an air of confidence that he'd never find one. Two days later from that conversation he had found several! Two of them were ready to sell their business due to health or unrelated issues. I couldn't believe him but he forwarded the email responses to me and sure enough, he had! Is that a big black dot or what?! Sheri said that we should invite him out for dinner. He could have whatever he wants and we'll eat crow.
Today we are just a thin pizza away from purchasing a pizza trailer, including the whole business; equipment, refrigeration unit, firewood and website included. That will be the final dot in the picture that says, "Vince, with your brother Greg, you're going to be real pizzaiolos!"
at 7:50 PM No comments: