We aren't experts. We aren't professionals. We are just a couple of guys who love pizza and hope to share our brand of pizza with others who like pizza. It really sounds cool to hear friends say to their friends in front of you, "Vince makes an awesome pizza." or "You've not tasted pizza until you've tried Vince's wood-fired pizza." Hearing that really gets my excitement up.
We did the Lodi Street Faire in, where else? Lodi. Had a really good run of sales to the Loditians. I don't think that's really a word. Maybe they're Lodites. 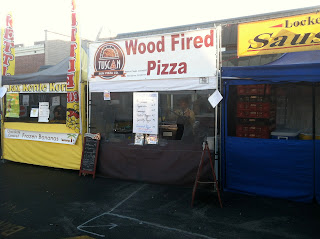 Real Estate agents will tell you though, that it's, "Location, location, location." They're right. We were snuggled in to our 10 x 10 foot space with the pizza trailer in back where nobody could see it or enjoy the show sandwiched between the Kettle Korn guy and the world famous Lockeford Sausages. Lockeford Sausages has a following and a clientele. People literally drive for hours to stock up on Lockeford Sausage made locally right next door to Lodi in the town of, you guessed it, Lockeford. I guess that would make those people Lockefordians? Anyway, not putting them down at all in any way cuz their sausages are excellent but darn when it comes to a reputation that precedes you and a corner booth with 2 exposures, they win! I wanted to go take pizza samples to the 20+ people standing in line at their booth and swing a few our direction. I didn't, that would be poor sportsmanship. I did enjoy their barbecue smoke from the sausages being grilled over an open flame and a large pan of fresh onions over the fire right where we had to enjoy it all day. It sure beats kettle korn blowing in your face. We did well in Lodi. Our measuring stick has become the Pear Fair and any comparison to it is where we mark it. 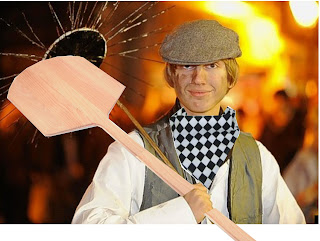 Next on the agenda is Elk Grove's very own Old Town Dickens Fair in downtown Elk Grove. It's been small and poorly attended in the past and you've got to give the poor volunteers some credit for trying to make a silk purse out of a sow's ear with barely any support from the city itself. This year appears to be different. For one, it's the 25th anniversary of the Dickens Faire in Elk Grove. Whoopee! I had to mention that but the main reason I believe it will be better than any year prior is this year they are actually getting support from the city and putting in an outdoor ice rink. I couldn't believe it myself until I saw the article in today's paper. They are actually going to do it, albeit temporarily, until Christmas but hey, that's taking a shot at being supportive.
I did request a space next to or near the ice rink as that, I believe, will be the main attraction. Piping hot pizza on a cold day in November while waiting to rent some skates has got to be a perfect combination. The smell of wood smoke drifting across the ice has got to entice those hungry skaters to come check us out while they soak up some heat from the 900º degree oven. It's like leading lambs to slaughter. Shouldn't even be legal but hey, no one's forcing them to skate.