This is the latest in my pizza journey. I've written about the history of pizza, the evolution of pizza, the flavors of pizza and some silly stories and adventures about pizza throughout my pizza journey. Who would have thought that making pizza would take me time traveling back to the 19th century in the world of Charles Dickens, H.G. Wells, Jules Vern, Nikola Tesla and Steampunk? A year ago I didn't even know what Steampunk was!
The Elk Grove Dicken's Fair has been around now for 26 years. The event coordinator told me they were having a trailer/booth decorating contest for the best Victorian decorations and costumes were optional but welcome. Hmmm, I wondered how I could go above and beyond the typical Christmas decorations that everyone might be using. I didn't wonder too long before I got the idea to steampunk our trailer and outfits. We are already Civil War re-enactors so we had 90% of the outfit in hand. The month of September I spent out in the garage building a death ray that would make Nikola Tesla nervous and proud. Not to nuke pizzas but as a fun item to display and  attract more pizza lovers to our booth. Next were the hats. The hats are a must. People of the steampunk era (a fictional reality that never happened that evolved into the future with only the power of steam, since electricity was nothing more than a parlor trick). Hats had goggles for exploring or scientific work or using in their flying machines or for just plain good looks. Gears were evident everywhere and a symbol of high technology. In October I constructed 3 hats for my wife, myself and a fellow worker. In November I worked on steampunking the trailer while a friend added organ pipes that pumped out steam and classical music. I have never worked so hard for a pizza event in preparing as I have this one. What helped to motivate me was the prize of a free vendor space plus $100 but who needs motivation when you have a killer idea? 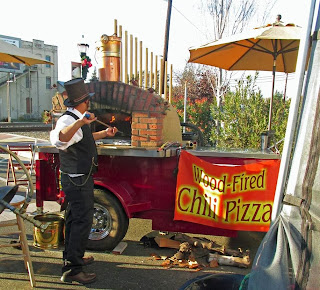 When November 30th rolled around I was excited to set up. We crammed liked the Superbowl was on in an hour and got things going. The fire was stoked, I was stoked, my crew was stoked and we were ready. When the event coordinator came around she looked  in amazement at  all the work we had done and said it gave her goosebumps just looking at it! That's what I wanted to hear! Quickly it was 10 o'clock and we were baking pizzas. People gathered and enjoyed our steampunking efforts as they looked at the death ray, took our pictures, watched steam come out of the organ pipes and ordered pizzas. Before long and some 150 pizzas later the judges came around  dressed in their Victorian outfits and they stood and stared. I introduced myself and the young lady said to me, "I just love Steampunk." "Oh, that's got to help," I thought. When she returned a second time to just soak it all in she was practically speechless. I think she was wondering why I went over the edge just to decorate comparing me to Chevy Chase in his Christmas Vacation movie and how he went over the edge decorating his house for Christmas. It's not hard to answer, I wanted to win!
Two weeks prior Sheri and I had gone to our first Sacramento Steampunk Society party all dressed in our finest gear sort of as a tryout for our newly fashioned couture. At the evening' s end I was selected best male steampunker. Now I was shooting for my second victory. About 4 o'clock the coordinator came by once more and said, "We need to talk." Hmmm, did I do something wrong? So I listened in very closely and she says, "You won..... by a long shot!" Hot diggety I'm 2 for 2 but not without the help of my crew and wife all participating.


What a kick it was to entertain the fairgoers and explain to those who asked what the death ray was for I explained, "It was for shooting down stray planets threatening our part of the universe." In addition to the death rays, organ pipes, steam and costumes I had propped up an explanation of what Steampunk was for those who were seeing it for their first time. It read: Steampunk is a neo-Victorian Era, evolving out of the 19th century where steam is the energy of the future. Explorers, inventors, scientists and daring young men in their flying machines built the reality that has become the Steampunk Era. The women then were sassy, classy and a little bit trashy. Hopefully we made this a fair that they will indeed remember!