We went wine tasting in the Amador Valley last summer with our friends Larry & Andrea from PA and got to talking to the wine guy who pours those little sips of wine. He was fun, personable, knowledgeable and enthusiastic. We got to talking about more than just wine when I saw an opening in the conversation that led to talking about pizza. I talked, he listened and before I knew it I was reaching into my pocket to whip out a Tuscan Sun Pizza card to him. He looked at it and studied it and started asking about the Pompeii oven pictured on the card which led to more conversation about pizza. Andrea was on crutches after breaking her ankle on an almost trip to Italy. I say almost because as they were leaving the parking garage in Philadelphia to get over to the airport Larry found out he was a dollar short for the garage attendant. Andrea had to get out of the car, go open the trunk to pull out her purse when the car behind them rolled up and caught her leg between the bumpers. Andrea fell with what appeared to be a bruised leg which quickly swelled up and instead of going to the airport they went to Emergency. There, she had pins and plates implanted into her ankle and the trip to Italy wasn't going to happen. What a let down! However, their timing was such that with the help of some Vicodin they decided to fly out west a week later and hook up with their friends who came in from Australia down in San Jose. Sheri & I drove down to San Jose to meet up with them then bring them back to Elk Grove to hang with us for a few days before jetting back to PA.

What a trooper Andrea was to hang tough and not let the accident bring her down! With a leg brace and some crutches we went wine tasting in the Amador Valley. That's when the eventual conversation started with Steve, the wine pourer, who graciously brought a stool over to Andrea so she could rest her leg.
About 4 months later Steve emailed us about doing a pizza event at the Terra d'Oro winery called a Tour of Italy set for March 2-3rd of 2013. We were excited to do a winery and such a beautiful one at that! Fast forward a few weeks and the pizza gig fell through. However, the same day it had fallen through another winery, The Old Sugarmill from Clarksburg just across the river from us called. Sheri & I have tasted wines out there on numerous occasions in the past. They wanted us in 10 days to sell pizza at their Port & Chocolate event! Sweeeeeet!
After the dismal attendance in December of the girls' high school basketball tournament in Antioch we still had 2 freezers full of pizza product. This is a winery and this crowd will be more sophisticated then a bunch of high school kids. We need to up our game and put some pizzas on the menu that were a bit more sophisticated. Thanks to the information provided by Albert Grande's website: Pizzatherapy.com and a pizza book written by my pizza hero Tony Gemignani we were looking in all the right places. Our menu consisted of 5 pizzas. Naturally we had to put a Margherita pizza on the menu using fresh mozzarella, Tony's marinara sauce recipe topped with fresh basil. Next we looked up his Fig & Proscuitto recipe which we altered slightly then a Bacon & Bleu recipe from our friend Ron Arguello who is also in the mobile pizza business, a Pesto & Sun-dried tomato pizza and finally a standard spicy pepperoni. No carnival pizzas here! 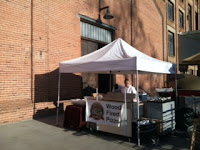 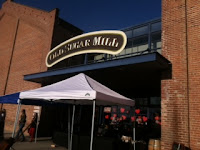 Beautiful warm weather on a windless day brought the wine tasters out in droves without the kids. At $20-$25 a person for the entrance fee at The Old Sugarmill we wondered how many pizzas we would actually sell.  I had estimated 50-60 pizzas per day due to the numbers we had sold at street events of this size. I admit openly that I have estimated every crowd at every event incorrectly. Once again I was way off. On Saturday we sold over 220 pizzas at a rate of 36 per hour. The most pizzas I had baked simultaneously in the wood-fired oven was five. Saturday I reached 9 and never burned a single one. All day long I was floating 4 to 5 pizzas at 900º. Sunday was nearly as amazing. Joani assembled pizzas at a constant speed of proficiency and accuracy. Chris & Greg expedited while Sheri ran the orders from inside the food court and took in wads of $20's and making change all day long. Even at 58 years old she can still work a crowd, make them laugh, educate them about wood-fired pizza and still make a few tips. What a team effort that was. I was proud of each and every one of them. Even my brother Dan showed up with my 86 year old mother who pitched in and ran orders up to the front and restock the ice chests while Sheri's sister laid out doughs and and helped out in all departments. Her sister, Florence was visiting from Arizona and her and Sheri weren't going to even work the event this weekend but got roped in anyway out of pure passion and consideration. I'm sure glad they were there. Couldn't have done it without them!
You can do all the math and give it your best shot at anticipating a crowd but when the weather invites you outdoors and wine tasting is in the air it can make wood-fired pizza all the more special and that much more tasty. Can't wait for the Old Sugarmill to call again! We'll be there!
at 3:51 PM No comments: