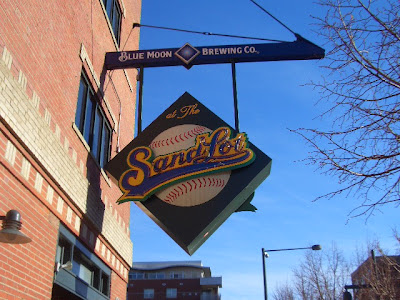 Blue Moon came knocking and I answered. I did, along with about 40 other artist from around the country.
As a side gig to my mural painting and pizza making I joined the Blue Moon team as an independent contractor to engage patrons at happy hour around Sacramento and encourage them to help create a Blue Moon crafted painting by picking up a brush and adding their touch to the canvas.
Blue Moon flew me back to Denver to attend their training where we met up at the Sandlot Brewery built right into the cornerstone of the Rockies baseball stadium, Coors Field, in downtown Denver. As a part of their promotional efforts to get people involved and drinking Blue Moon Artfully Crafted Beer, we, as artists will be on sites during Happy Hour at selected bars and venues as ambassadors to Blue Moon around the country. My area, starting in April of this year, is Sacramento and vicinity.
They call it the 16 year overnight success story as Blue Moon has broken the threshold into a trendy market of crafted beers. Their anchor beer, an unfiltered Belgian White is served with an orange slice on the rim setting them up visually to be noticed. It apparently has worked. They are even being noticed and desired in Europe, the beer making continent for centuries.
After  a short lecture, slide show, tour of the brewery, and beer tasting we got a visit from the brew master himself. He had set out to become a pediatrician, took a left somewhere near a Coors sign and ended up being educated in the brewing of beers in Belgium where he earned his PhD. He is one of 5 people in the U.S. with a PhD in brewing. I guess someone else will be caring for all those children he hoped to care for as beer became is number one baby. Before leaving for Denver I checked out some pizzerias on the web and found within walking distance of my hotel a little place called Mile High Pizza with great reviews. Smaller than a shoebox but a warm atmosphere and an excellent pizza I sat down to a combo with mouthwatering flavors and a thin chewy crust. It was near closing time when I began talking with one of the pizzaiolos named Dino. Very knowledgeable and friendly once I engaged him in some pizza conversation. He had been trained in Naples and is the son of a pizza making family, so we traded a few stories about tomatoes, cheese, yeast and of course, Tony Gemignani, who is my pizza guru.
I had to overlook the fact that they are Bronco fans there in Denver and mentioned to him my pizza blog where I had been pulled over by the CHP before Halloween dressed up as the Oakland Raiders' dead Al Davis. I told him I would give him high marks for his pizza, which I am. However, I won't forgive him for being a Bronco fan though. I wasn't able to finish the pizza, although I tried, but didn't want to throw it away either so they boxed it for me. Just 10 steps out the door a young homeless man asked me if I had a cigarette, which I didn't but I responded by asking him if he was hungry. He said he was starved and I believed he was serious to a fact. I handed him the warm pizza and hoped that made his day and warmed him up a bit in the below freezing, icy, dry air of Denver. I thought later, he may have even been a Bronco fan at some point in his life but I think that even dead Al Davis would've approved of feeding a hungry Bronco fan. Rest in Peace Al.
at 2:13 PM 2 comments: