Par for the Crunch

I just bought another 50 pounds of high gluten flour. What I'm hoping to do is change some of the ways I have been traditionally making pizza. In other words, not so much by the book. After visiting Pizzetta 211 in San Francisco and talking to the server about their pizza it opened my eyes to the fact that good pizza can be made to taste right even without the world class ingredients. This too, has been re-enforced by Chef Ramsay on Hell's Kitchen where the contestants are challenged to create and cook a  meal using only standard and inexpensive ingredients such as ox tail, liver and such to serve as a high end plate. Although I'm not ready to give up the high gluten flour (since I just bought another 50 lbs.) or the Stanislaus County tomatoes in which I purchased another case but to experiment with technique and procedure.
Crunch! That was my next goal. To find the massive crunch in the thin crust pizza that hasn't always been there for me. I had been experimenting with different temperatures on the BBQ oven and the kitchen oven. Build the pizza, slide it in and hope for the crunch when it comes out. Yes, no and sometimes seems to be the result. Then it dawned on me, crunch could come from pre-baking the pizza skin, then assemble it and finish baking it. I tried that procedure the first time and over cooked it although it was super crunchy. Next time I tried again for about half the time as the first skin. This one again was appearing to be crunchy while looking good through the glass oven door. I pulled it out after about a minute, popped the bubbles and laid on the sauce, cheese and toppings. I slid it back into the oven and finished baking it at my regular temperature of about 550º.  I thought, this is going to be good so I rushed over to get my camera, set it on video and turned on the mic. This is what I was hoping for! Turn up your speakers so you can hear it:
Par-baking I believe, is what this technique is called. I don't know the exact definition of Par but as far as I can tell from the English language it seems to define when something is not quite the whole deal. An example might be: Para-legal which wouldn't quite be the attorney but an assistant. Para-professional: not quite the professional;  paranormal of course would be: not quite normal etc. I'm just not sure where a paramecium, parcheesi, parachute and other Par words would fit into that theory. Oh well, my hobby is making pizzas, not dissecting the English language.
at 12:55 PM 3 comments:

I never had the success that I wanted with the creamy white garlic sauce. After a few strike outs I start to wonder if I should just leave it to the pros. Then, the other day I decided to follow my own advice and Google 'world's best white pizza sauce recipe'. There were quite a few more than before and one that jumped out at me was an authentic New York white pizza sauce. 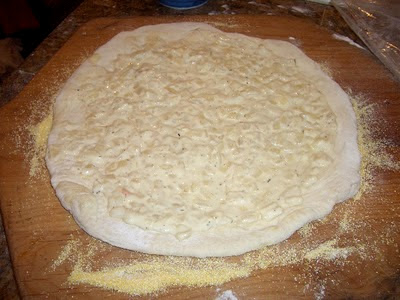 Pizza is synonymous with New York like sausage is with Chicago, wine with California and Al Davis with suing the NFL. That's the sauce I wanted to try next. It called for a whole onion chopped up with 3 cloves of crushed garlic all sauteed in a couple of tablespoons of EVOO. After 5 or 6 minutes on a low heat, I poured in some heavy cream, added some thyme, salt & pepper and stirred until it thickened. "That's it?" I wondered, "that's too easy." But sometimes I need to remind myself that in art they would teach us that less is more. Hmmmm. Although the sauce was lumpy from all the chopped onions and not the appearance of Round Table's white sauce I decided the appearance was secondary to the flavor. 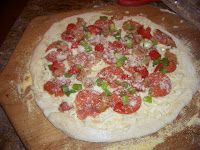 Using one of Gail's doughs I went for my favorite Round Table pizza recipe called the Italian Garlic Supreme. The sauce smelled good and tasted fine but it didn't blow me away at first but after it cooled a bit I spread it on the hand rolled dough when I started getting hits of garlic. I covered it with a healthy portion of mozzarella cheese and strategically placed some pepperoni, crumbled (cooked) spicy Italian sausage, some green onions and a few chopped tomatoes from Dad's garden and into the oven it went. That combination of toppings also makes a very pleasing visual appearance as well, since it's so colorful. You almost forget about the lack of anti-oxidants with all the cheese, sausage and pepperoni. It doesn't matter, I have decided that I am pro-oxidant anyway.
A few quick minutes later that puppy was sizzling with huge garlic aromas and not the onion which really surprised me. I started speaking with a bad Italian accent again signaling that, "dis-uh pizza was uh gonna be-uh good one, ya know?" The WOW factor was a 9.5 out of a possible 10. I was impressed. 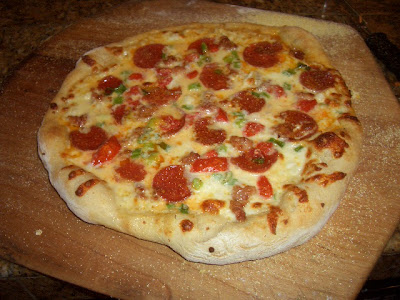 The first to last bite was exciting. Round Table, move over cuz this is New York pizza talking. Maybe Al Davis wouldn't be so angry with everybody if he just sat down to a good New York Pizza first. 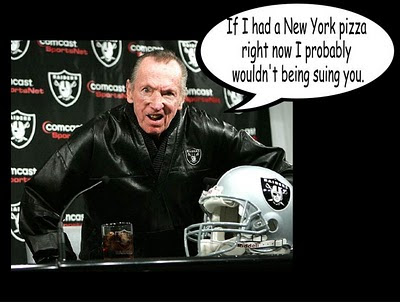