It's been nearly a year since I ordered and received the Fibrament D 16 lb. pizza stone that I had to have shipped to Starbucks as my home can't double for a commercial business address. It's thick and heavy and definitely can hold the heat. Anywhere from one to three times a week since April of 2010 I have had the convection oven running at a maximum 550º without a hint of a problem. Most of all, over the past 10 months, it hasn't broken. I had gone through no less than 3 inferior ceramic stones before searching out this one to satisfy my craving for home baked pizza. In that time I have tested and used it well leaving a number of battle scars that just show aging and perfection. For the most part I store it in the oven on the rack and only remove it when I might be baking or roasting something else. You know, one of those non-pizza items. Cleaning it is easy. Just a simple dry brush down to remove the old corn meal and a scraping of any cheese that may have oozed over  and baked on. I never use soap or water on it as it could soak in and cause it to crack while baking.
The battle scars on it are telling a story. Let me explain. If I was to walk into your house to paint with new painter whites, a shiny new ladder along with buckets, tarps and brushes all spotless and perfect one would quickly and easily come to a conclusion that this might be my first job and my resume as a painter would be shattered. I know I would start to wonder that too if the roles were reversed. The blackened staining on the stone is merely a testament that I have used it often. I suppose it's true of an iron skillet, a messy desk or a painters' hat. I suppose also, by that reasoning, one could jump to the conclusion that I use my head a lot by the lack of hair on top! 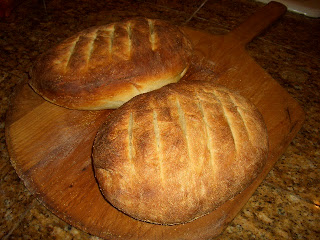 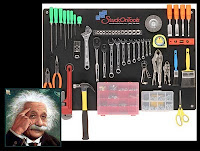 A very wise man once told me, that to do the job correctly that you need the correct tools. I guess you don't need to be Einstein to know that but it proves to be true even when baking pizza. (a good thing to remember Dad, thanks!) Anyway, I have used it for baking calzones and even lately, some sourdough bread, (a close cousin to pizza). If dad had all perfectly clean tools in his garage with glistening chrome, hanging perfectly in corresponding size with traced outlines on an immaculate tool peg board I would have concluded that he was talking in theory and not from practice. That was never the case. Orderly, yes... but with battle scars from countless jobs completed well.

Valentine's Day has arrived. I've never been one to commit to all the Hallmark holidays and I tend to boycott some of them. However, in today's paper there appeared an article under Strange Stuff that caught my eye. For a $10 donation you can name a giant cockroach at the zoo. I'm not really interested in naming any cockroach, even if it does feed on pizza scraps but I like the slogan they have. I decided to memorize it and save it for future use. I appreciate a good slogan with a catch phrase like this one.

Sheri told me I don't need to get her anything for Valentine's Day, however I showed her the comic strip Pickles which read something like this: "Earl, do you remember what day today is?" "Yes, I do. If you're not wearing green I get to pinch you." Opal responded by telling him "That's St. Patrick's Day!" and he ended up grumbling about it on the front steps trying to sort out which day was which, Valentine's Day, St. Patrick's Day. Sheri wasn't distracted by the comic strip, so I had to pull out the artillery and I told her I did get you something, a cockroach.  "Chocolates melt, flowers wilt but cockroaches are forever." She wasn't amused until I told her the slogan, then she got a good chuckle out of it.
I can empathize with Earl. If we were to celebrate National Pizza Week, since it is listed as the second week in February, I don't see how I could end up on the front steps with Earl. According to American Food Holidays, it's a real holiday. Which brings to mind the next set of questions. If this were to really take off, how exactly would we celebrate it? Would we send greeting cards made by Hallmark that would read something like, Roses are red, violets are blue, I'd rather be eating pizza with you. Would FTD be swamped with orders from around the country trying to drop ship thousands of pizzas to everybody from the Pacific to the Atlantic? Could we decorate our homes with pizza ornaments and lights made of plastic? What if we were to dress up as sausages and pepperonis and go door to door after dark to collect a bag full of pizzas by the slice? Instead of trick or treat we might say, "Cheese or hot peppers". I'm thinking this holiday has potential. 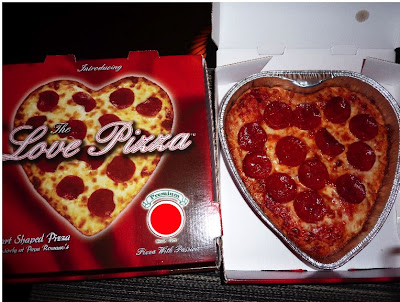 Probably to get it in motion we would want to greet our friends and family with a catch phrase like, Pizza Giorno Felice which would translate to Happy Pizza Day. The response might be, "Vegetarian or carnivore?" This of course would lead into Pizza on Earth like Albert Grande of Pizzatherapy.com says on his website.
Hallmark should be jumping on this one and for a single day we could all speak in a bad Italian accent wishing everybody "Pizza Giorno Felice and Pizza on Earth."
at 1:09 PM No comments: