There we are on the patio out back counting pizza tickets and piles of cash adding them up from our last pizza event when my cell phone rings. It's my friend Larry from Pennsylvania whom we have travelled with to Jamaica, China and Las Vegas among other outings. He and his wife, Andrea had booked a 2 week cruise on a 5 masted sailing ship around Italy starting in Rome and ending in Venice exploring 5 other countries along the way for next June of 2015. This was to be an expensive cruise by the sounds and sights of it. It had also been sold out, but he got word that someone had cancelled and they wanted us to go! Immediately I told him there was no way we could afford it so I opted to pass. With some insistence on his part using that old line, "We're not getting any younger." I paused and and had to tell him that if we DID go we would have to cancel our Burningman adventure this summer to save money for Italy. "Can we think about it?" I asked. "No, you can't because if you do it will be sold out from under us as we speak," he said.  Luckily Sheri was there to hear the conversation so I didn't have to sell it to her. Without hesitation, she said we should look it up and check out the ship and the itinerary not to mention the cost. At once she was on the computer and after a minute she said, "I think we should go." Let's see, hmmm, staggering around on the baking hot playa floor of the Nevada desert, amid dust storms, freezing nights, no electricity, eating dirt, little water and smelling nasty for a week OR go on a 5 masted sailing ship around Italy while the crew pampers and feeds you, folds back your bed covers every night after placing a chocolate mint on your pillow along side the bath towel they neatly folded into a cute little bunny rabbit all before waking up in another country along the Adriatic Sea. Well, that's a no-brainer! So we called and booked it. There's nothing like a plastic credit card to nail things down. We are totally hyped now, but suddenly having buyers remorse, since we didn't know how we were going to pay for it. We walked back out to the patio where all the cash and pizza tickets were laying and suddenly it occurred to me. Pizza will pay for it! After all, we're not getting any younger! (To quote Larry). Let's do this thing! We've been doing a lot of events selling our delicious wood-fired pizza that I had been saving the money to spend on something but didn't know what yet. Yes, that's what we've been saving it for, of course! 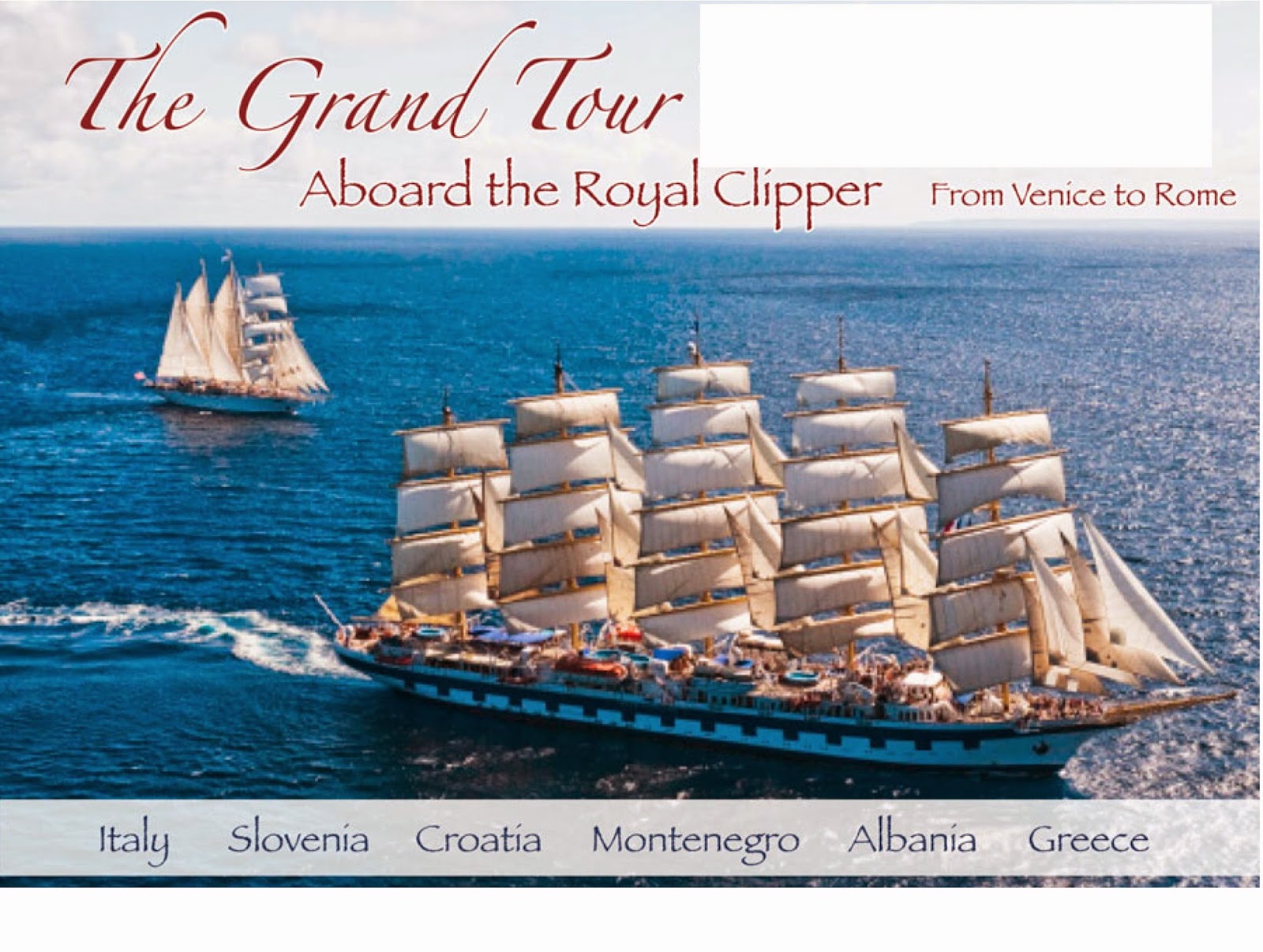 We are both fans of Rick Steves who does his travel shows on PBS to raise money for the station and about 2 weeks after we settled into the nightmare of finding airline tickets and working our schedule of being gone for 2 weeks when Sheri says, "I want to do a land tour of Italy." Land tour? "Yes, a land tour with Rick Steves around Italy." "OMG, how are we going to do that?" I asked. "We'll save for it and forgo the unnecessary things like heating the house and eating food." she says. OK, but let's get Larry and Andrea on board with this idea. With a little cajoling they agreed. "Heck, we talked you into a 2 week cruise, I think we can do this 17 day land tour also," he says. Yes! They're in and on board, you might say. This is amazing. Our best friends whom we met on a cruise over 12 years ago, who stayed with me when I broke my shoulder in Jamaica, hung with me 8 months later when a tree broke and fell on us in Napa, suffered another set back when Andrea broke her ankle on the way to the airport in Philadelphia bound for Italy in 2013 causing them to miss that trip and now we are reuniting for another vacation of a lifetime together.  What could possibly go wrong?

Then in October this year while they were visiting Key West in Florida, Larry got knocked down and was later mentioning how his upper back and lower neck were hurting the next day. After a couple of days of pain they went to see a doctor. Larry had broken his neck! The C-7 was no longer. More like a C-7 and a half! Air vac'd back to Miami Cedar Sinai, he had surgery to repair his neck and send him home a week later in a neck brace.
I knew Andrea wouldn't want to be bothered with phone calls and questions so we texted. The anticipation of how he was doing was killing us. I'd been through a broken neck back in 1993 and knew how traumatic it can be especially for the care giver, in my case, Sheri. I was expecting to hear that since this happened the whole Italy thing is now off. Fingers crossed we finally got word that they are still going. Larry is improving everyday and Andrea's ankle has healed. I stay away from Napa and falling trees and Sheri is doing her best to not get sick at the human germ factory or as some call it, elementary school, where she teaches.

Ten years ago I told Sheri I would take her to Italy for her 50th birthday. Money was tight so I bargained her down to a stay at the Venetian in Las Vegas. When I discovered I couldn't afford that either I told her I'd take her to the Olive Garden Restaurant for dinner but low and behold we ended up just having a pizza and a salad with Italian Wishbone dressing on it. She still stayed married to me! It's also our 40th anniversary in 2015 and she turns 60 next year so off to Italy we go with a 2 day stop over in Copenhagen before actually getting to Rome.
Rome, the Eternal City was where I first encountered a wood-fired pizza 20 years ago. It's going to be a whole new appreciation of wood-fired pizza when we return. I just gotta keep making those pizzas to get us there and back safely. Yes, and Larry & Andrea home safely too. Arrivederci