It's been a month now since dad passed away. Wow, it goes quickly and it takes time. Such a paradox. He was proud of himself to have outlived all his brothers and his father but time finally caught up with him. The last of that generation of 4 boys and yet, one sister still lives, his sister Karen survives him. It has to be lonely in some ways being the last one but their legacy will continue in all the children and grandchildren and even some great grandchildren. The Larsen heritage will live on in so many souls.
Dad enjoyed reading my pizza blogs to mom I've been told. He was proud of us all although he rarely mentioned it. I could tell by his actions though. Their occasional day trips up to Elk Grove to visit for a day or two were always fun and welcome. It also gave me a captive audience when pizza making 3 times a week was a new adventure and I was able to share my latest creations with them. Dad wasn't one to go out to eat as he enjoyed mom's home cooked meals and I think my pizza as well. I know he did mention it one Sunday morning when I got up before them to turn on the oven and get it up to 550º so I could bake them a breakfast pizza. He had never tried one nor had most of us until pizza became synonymous with the word "Vince".  I had been getting somewhat creative and was discovering breakfast pizzas. If I look back into my blogs I seem to recall I did one on just breakfast pizza. I had patterned it after a favorite breakfast of mine from a coffee shop named Perko's. It was a grilled English muffin with sliced ham or bacon, scrambled egg, and a slice of melting cheddar topped with hollandaise sauce. They called it the Benedict Scramble. Twice a week I would eat those for about 10 years along with a few cups of coffee. 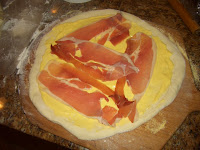 What I kept desiring I think, was the hollandaise sauce. I'm sure it was packaged institutional stuff but I enjoyed it anyway. Hollandaise sauce was to be the base sauce for my fledgling breakfast pizza. I made mine fresh though using lots of egg yolks for that deep yellow color and egg flavor. Next I laid down the mozzarella shredded cheese blend and the used thinly sliced proscuitto sparingly as it is quite salty. On a large family style pizza I would make about 4 wells in the cheese and around the proscuitto to crack an egg into each well into the oven it would go and I would watch carefully as the eggs would begin to cook. About 12-13 minutes later it would come out piping hot with that heavenly aroma, then serve it to mom and dad, Sheri and myself. Dad wasn't ever quick to say how he felt about us, even if it was good, but he was the first to speak up that Sunday morning to compliment that Sunday morning breakfast pizza. I can still see him sitting there munching it down and enjoying it like it was meant to be enjoyed. 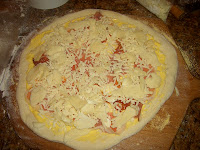 Dad was too ill this summer to really take a good luck at our newly purchased pizza trailer but he did get to taste our wood-fired pizza at least once for which I am glad. I don't think he had ever tasted wood-fired pizza before except maybe in the Army Air Corp during the 2nd Big One. Naaaah, probably not.

Got the Pizza and Beer Blues

Got the blues one more time. Just as I had told everyone about the Blue Moon gig where I was sent to Denver for with the training and all and then never heard from them again I figured my stint was over as a Blue Moon ambassador before it began. No problem, on to other things like murals, TV appearances and wood-fired pizza. That's when the phone call from Denver came in. "Vince, we have a gig for you this week on Friday" they said. "OK, great! When and where?""We'll get back to you."Tuesday comes and goes. Wednesday comes and goes. Thursday finally rolls around and still nothing. I call them back, and they can't believe I haven't been told when and where! Oh, it doesn't sound like it's really going to happen. Just as I was mentally preparing myself for the worst my contact shows up with all the gear, easel, canvas. paints and brushes.
The evening went just as planned and just like in training while people lined up to help contribute to the Blue Moon painting. Budding artists, pretty girls and a throng of others who wanted to contribute their two strokes worth. One of the patrons had asked me why wasn't I contributing to the painting? Especially since they had hired artists to do this promotional gig! I had to tell him, "Blue Moon is paying me NOT to paint." "Huh, that sounded funny," I thought. Hmmm, I thought they liked my art, that's why they hired me! Right?! Either way the completed painting will hang at the Pour House in Sacramento where the event took place.
Meanwhile, I had been called by a former client who had been showing off pictures of the latest mural I had finished for her. Somehow Good Day Sacramento got wind of it for their Dream Destination on the morning show of August 18th. The camera crew and news guy were interested in doing a piece using my mural as a topic. The mural on her back wall was of a scene of Paris with the Eiffel Tower in the background. Seven o'clock in the morning, we aired live from her backyard with Tamara, the owner, and I, as we talked about the origination and the construction of the painting. That was a fun little spot, not to mention some free advertising for me!

Click here if the video doesn't start.
During all these appearances of paintings and the like, I still was able to fashion a pizza I had only read about. It was called a Bacon & Blue. Sounded good, so I had to do a little research. Bacon, of course gets my mouth watering right away. So the blue had to be Blue Cheese, which of course it was. I had made up some ranch dressing to use instead of a red or white sauce. First a thin layer of shredded mozzarella and a just a sprinkle of the blue cheese. Topped it with some cut up, thick sliced, fried bacon, some chopped green onion and red peppers and mmm mmmm. It's a keeper.


This last week Sheri's sister and brother-in-law were driving through on their way from Arizona to Oregon. It seemed like the logical thing to do, which was pull the pizza trailer out of the garage and fire it up for them. I had watched a TV show that featured mobile food trucks and one of them was a pizza trailer. One of their signature pizzas was getting great responses from the customers. A combination of cheeses that made me ooze with curiosity. Mozzarella, Fol epi, Provolone and Blue Cheese baked on a docked dough coated in a garlic olive oil and basil bits. The final touch was a spray of truffle oil over the top. I have to say, it was better than any cheese pizza I had ever tasted with an earthiness from the wood-fired oven and again the truffle oil it made for an elegant and rustic pizza at the same time.
Hand crafted, wood-fired pizza on your driveway. If that doesn't drive away the blues then I need to change hobbies and professions! 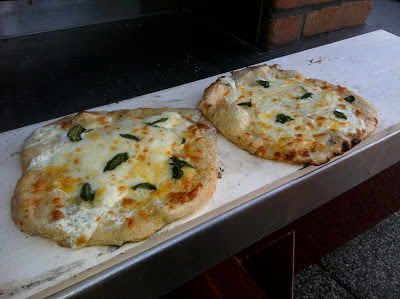